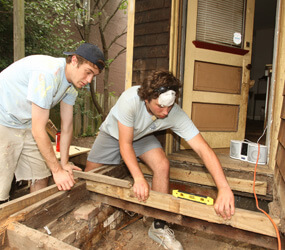 Yolanda Brooks-Summerville sat on her porch June 25 and sobbed. Just the thought of walking the stairs of her Park Heights Avenue row house overwhelmed her. She has brutal knee pain and the railing that lines her stairwell wobbled as she applied pressure.

“I had to crawl up the steps and I have been going to therapy getting shock treatments,” Brooks-Summerville said as the tears overtook her.

It wasn’t just about her. She thought of the danger that the railing posed for her three grandchildren.

Kate Lutz, a 16-year-old parishioner of Sacred Heart in Glyndon, stood just a few feet away. She comforted Brooks-Summerville by saying, “We’re making it easy for you. We got you, girl.”

From June 21-27, Lutz and a group of young people from the Archdiocese of Baltimore put in a new sturdy railing for Brooks-Summerville, helped repair her front and back doors and filled a hole in the dining room floor.

The young people were part of the annual Baltimore-Appalachia Workcamp, which spent five days in Baltimore City working at different sites.

The project brought together young parishioners from Hunt Valley’s Catholic Community of St. Francis Xavier, Baltimore’s St. Francis of Assisi, Holy Trinity in Glen Burnie, Our Lady of the Chesapeake in Lake Shore and St. Bernadette of Severn.

Across the archdiocese, dozens of workshops are scheduled throughout the summer months.

Inside Brooks-Summerville’s home, veterans and rookies of the workcamp were toiling diligently to complete their tasks. Bobby McGraw, a 20-year-old Holy Trinity parishioner who attends University of Maryland, College Park, has participated in the workcamp for five straight summers. It was a 90 degree day, but he and his crew pushed ahead.

“We want to get it done for Miss Yolanda,” McGraw said.

“We’re not leaving this half-done,” added St. Francis of Assisi parishioner Dan Malone, who will be a junior at Calvert Hall College High School in Towson.

John Dushel, of Our Lady of the Chesapeake, was reluctant to take part despite his brothers being former regulars. By the end of the week, he said he was transformed.

The workcamp has operated for several years and relationships have been built with various agencies and organizations. Those groups identify people and locations that are in need.

Brooks-Summerville applied to another workcamp group for assistance, but was unsuccessful. Her mother’s nearby house was also receiving work this year.

The youth paid $300 to take part in the work camp. Much of the money goes toward supplies for the next year’s efforts.

“It’s just that opportunity to really see someone else happy for what they did and to build that relationship,” Richardson said. “It becomes less about them and more about the people they work with, and that’s a really huge step for them.”

Brooks-Summerville looked at the renovations and marveled.

“I can’t thank them enough,’ she said.