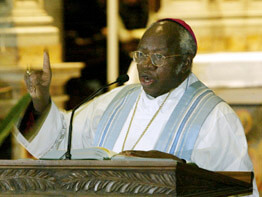 SEOUL, South Korea – The Seoul Archdiocese has cautioned Catholics against meeting or consulting with an excommunicated African archbishop residing in South Korea.
Lay Catholics are to consult with their parish priests if they are invited to any meeting with Archbishop Emmanuel Milingo, former archbishop of Lusaka, Zambia, the Sept. 9 archdiocesan bulletin advised.
The Asian church news agency UCA News reported the bulletin told Catholics, “Former Archbishop Emmanuel Milingo, who married a member of the Unification Church and caused a scandal, was excommunicated by the Vatican.”
The bulletin pointed out that the excommunicated archbishop is promoting his U.S.-based Married Priests Now! movement in South Korea. The movement that he founded in July 2006 advocates that the Roman Catholic Church allow married priests in active ministry. Under church law, Latin-rite Catholic priests must remain unmarried and are bound to celibacy.
Father Peter Pai Young-ho, secretary-general of the Korean bishops’ conference, told UCA News Sept. 12 that “since Milingo is excommunicated, he has no authority to gather former Catholic priests or facilitate their Catholic priestly ministry.”
In September 2006, two days after Archbishop Milingo ordained four bishops without papal approval, the Vatican declared that all five incurred automatic excommunication because of the illicit act.
Father Pai said the excommunicated archbishop fraternizes with Catholics and visits Catholic institutions as though he still holds episcopal office.
“It was reported that he has shown himself in Catholic archbishop’s attire and held prayer meetings with local Catholics in several shrines in the country,” the priest said.
“The shrine authorities, who did not recognize him, welcomed him, thinking he was a foreign archbishop visiting Korea,” Father Pai added.
He said the bishops’ conference, concerned over such occurrences, also issued a message last month warning dioceses in the country to be wary. That message stressed that Archbishop Milingo has no authority to conduct activities on behalf of the Catholic Church.
Kim Jin-choon, president of Cheongshim Graduate School of Theology, run by the Family Federation for World Peace and Unification, told UCA News Sept. 12 that Archbishop Milingo entered the country in January and has been living here with his wife, a former Catholic. The federation is the successor to the Unification Church founded by the Rev. Sun Myung Moon.
Archbishop Milingo, now 77, married South Korean Maria Sung in 2001 at a mass marriage ceremony in New York. Rev. Moon presided.