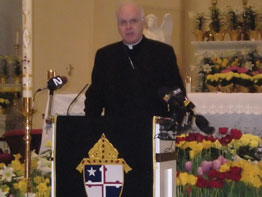 Baltimore Catholics have a lot to celebrate this spring. April 8 marks the 200th anniversary of the elevation of the Baltimore diocese to archdiocesan status by Pope Pius VII, and Catholic leaders have planned a host of special events to mark the historic event.

Archbishop Edwin F. O’Brien unveiled the official logo and program commemorating the bicentennial during a March 28 press conference at the Basilica of the National Shrine of the Assumption of the Blessed Virgin Mary in Baltimore.

“The roots of the Catholic Church in the United States are deeply planted here in Baltimore,” said Archbishop O’Brien. “We are so very proud of our important role in our church’s history and look forward to celebrating this historic anniversary with the greater Baltimore community.”

The local celebrations will kick off just before Pope Benedict XVI visits Washington, D.C., and New York April 15-17. They will continue through the spring.

The pope is expected to highlight Baltimore’s bicentennial and the 200th anniversary of the founding of the dioceses of Boston, New York, Louisville, Ken., and Philadelphia during Mass at Yankee Stadium April 20.

A special display of historical documents will be unveiled in Laubacher Hall at St. Mary’s Seminary and University, Roland Park, on April 12 at 2 p.m. The exhibit will be open from 4 to 6 p.m. Monday-Thursday from April 14 through May 1.

Dr. Tricia Pyne, archdiocesan archivist, said the exhibit will feature important letters, papal bulls and documents relating to the bicentennial. They include an 1808 letter from Archbishop Thomas Troy of Dublin, Ireland, to Bishop John Carroll sharing news that Rome had created four new diocese in the U.S. and elevated Baltimore to an archdiocese.

A series of 7 p.m. lectures named in honor of America’s founding archbishop, John Carroll, will be launched April 22 at the Baltimore Basilica. Archbishop Timothy Dolan of Milwaukee will deliver the first lecture April 22, speaking about John Carroll. George Weigel, a Baltimore native and biographer of Pope John Paul II, who serves as a distinguished senior fellow with the Ethics and Public Policy Center in Washington, D.C., will speak May 12. His topic will be “Popes, power and world politics: from Leo XIII to Benedict XVI.”

Colleen Carroll Campbell, author of “The New Faithful: Why Young Adults Are Embracing Christian Orthodoxy,” will speak about young adults and Catholicism June 9.

As part of its spring concert series, the Baltimore Basilica will present an April 13 concert by ‘An die Musik Live!’ The concert will feature works by George Frederic Handel from his time in Italy. The same group will also present a concert of music by Antonio Vivaldi June 1 at the basilica.

In conjunction with the bicentennial celebrations, Archbishop O’Brien will break ground April 11 at 11 a.m. on the Pope John Paul II Prayer Garden, located on the site of the former Rochambeau apartment building in downtown Baltimore.

“The celebrations will be an opportunity to reflect on our place in the history of our church and nation – especially as it pertains to religious freedom,” said Sean Caine, spokesman for the Archdiocese of Baltimore.

Baltimore was established as the first Catholic diocese in the United States in 1789, serving the original 13 states. By 1804, its boundaries stretched north to Maine, west to Idaho and south to the Florida panhandle. Today, the archdiocese consists of the city of Baltimore and Baltimore, Carroll, Anne Arundel, Harford, Howard, Frederick, Washington, Garrett and Allegany counties.