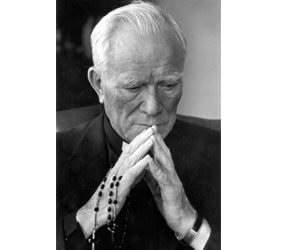 The Archdiocese of Baltimore recently completed an exhaustive investigation into Father Peyton’s life and ministry, and was to send copies of its 16,000-page report to Rome’s Congregation for Causes of Saints this week.

As The Catholic Review went to press, Archbishop Edwin F. O’Brien was to celebrate the closing of the archdiocesan inquiry with a July 20 Mass at the Basilica of the National Shrine of the Assumption of the Blessed Virgin Mary in Baltimore.

Citing the Baltimore archdiocese’s experience with other sainthood causes, the Vatican asked Baltimore to take over the investigation of Father Peyton’s cause from the Diocese of Fall River, Mass., in 2006.

Father Gilbert Seitz, Archbishop O’Brien’s delegate for the inquiry, said the Vatican will use the Baltimore report to determine if Father Peyton lived in a heroic manner. The pope will then determine whether Father Peyton can be called “venerable,” and officials will investigate possible healings attributed to Father Peyton’s intercession. If a healing is determined to be miraculous, Father Peyton – now known as a “servant of God” – will be declared “blessed.” Another miracle would be needed for him to be canonized.

“It was fascinating coming to know Father Peyton,” said Father Seitz, noting that approximately 80 witnesses who knew or worked with Father Peyton were interviewed for the report. They included 50 witnesses throughout the United States and 30 in 13 other countries.

“He was fierce in his loyalty to the church and he was very proud to be Catholic and to share his faith,” Father Seitz said. “He probably was the first to see the role that electronic media could play in evangelizing.”

Dolores Hope, widow of Bob Hope, was among the American witnesses interviewed. Joseph Campanella, a Hollywood actor, also gave testimony. Father Peyton came to know them and many movie stars and celebrities after founding Family Theater Productions in Hollywood in 1947. The ministry produced more than 600 radio and television programs and 10,000 broadcasts. He also conducted rosary crusades for millions of people in dozens of countries.

“He was extremely dedicated to promoting devotion to the Blessed Mother through the rosary,” said Father Seitz.

The Baltimore team asked the bishops of 19 dioceses in the United States and 13 dioceses in 13 countries to appoint boards to take testimony and forward it to Baltimore. Father Seitz said the inquiry reached out to people “from Sydney to San Diego and from Rome to Rio de Janeiro.”

“Our task was to coordinate the gathering of all that information,” he said. “We also gathered archival material. A historical commission was appointed and they visited seven different archival depositories to gather historical documents.”

Eileen Gerwin, a parishioner of Our Lady of the Angels in Catonsville, served as Father Peyton’s first secretary from 1945-48 in Albany, New York. She met the priest when she was a sophomore at Vincentian Institute, a high school Father Peyton often visited to speak about the rosary.

“He used to dictate letters to me after school and I would type them up,” remembered Gerwin, who was one of the witnesses in the inquiry. “They went out to priests and bishops and others to promote the rosary.”

Gerwin remembered Father Peyton as being a “gentle” and “brilliant” man who was wholly devoted to the Blessed Virgin Mary.

“He loved her and didn’t mind telling people all she did for him and his family,” Gerwin said. “He dedicated every minute of his life to her. I never remember him going to a play or a sports event or movie. He almost seemed to have no other passion than our Blessed Mother.”

Gerwin said she felt like she was in the presence of a holy person whenever she was near Father Peyton.

Father Peyton, who emigrated to the United States from Ireland at age 19, was the founder of Holy Cross Family Ministries, which includes Family Rosary, Family Theater Productions, Father Peyton Family Institute and Family Rosary International. He died in 1992 and is buried in Easton, Mass.

Dr. Andrea Ambrosi serves as postulator of Father Peyton’s sainthood cause in Rome. Father David Marcham is the vice postulator. Locally, Teresa Ewen was notary for the archdiocesan inquiry and Capuchin Franciscan Father William Graham was the promoter of justice.