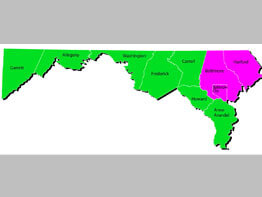 With the Archdiocese of Baltimore not likely to receive an auxiliary bishop to replace Bishop W. Francis Malooly, former western vicar and now bishop of Wilmington, the archdiocese is restructuring its vicariate system.

Bishop Mitchell T. Rozanski, current eastern vicar, will lead the second vicariate, which will be made up of the parishes of, starting in the west, Garrett, Allegany, Washington, Frederick, Carroll, Howard and Anne Arundel Counties.

The yet-to-be named vicariates replace the current eastern, western and urban vicariates, which were created by Archbishop William D. Borders in 1975 as a way to provide pastoral support to every parish in the archdiocese.

In a telephone interview with The Catholic Review, Archbishop O’Brien said he wanted to maintain a vicariate structure because he finds it “extraordinarily effective.”

“There’s a wonderful rapport with our vicar bishops and the faithful, clergy and laity,” he said. “The bishops know the parishes very well and they are accessible to all concerned. It’s a uniquely successful system of pastoral care.”

Asked why the archdiocese isn’t likely to receive another bishop, Archbishop O’Brien said he has had informal discussions with church leaders who gave him “solid reason to believe” Baltimore will no longer have three auxiliary bishops.

Vicars forane, priests who provide leadership for clusters of parishes throughout the archdiocese, will take on more responsibilities as they assist Bishops Madden and Rozanski.

A chief operating officer will be hired to carry out many of the administrative duties at the Catholic Center in Baltimore, duties previously held by Bishop Malooly.

The restructuring, which goes into effect Oct. 1, comes after many weeks of planning and consultation, according to Archbishop O’Brien. The archbishop’s 35-member council of priest advisors voiced unanimous approval of the plan during their Sept. 17 meeting.

Bishop Rozanski told The Catholic Review that other pastoral models were considered, but the vicariate system was most effective.

“I’m looking forward to meeting the pastors, pastoral life directors and staff in Western Maryland,” said Bishop Rozanski, who plans to visit all the parishes in his new vicariate. “Many of the parishes are working in close collaboration in sharing staff and vision and programs. I look forward for that to continue.”

With one fewer bishop, Archbishop O’Brien and his two auxiliary bishops will be taking on the responsibility of celebrating more confirmations.