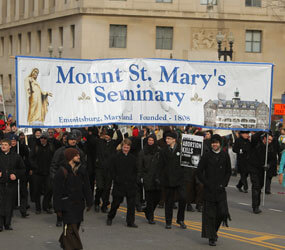 WASHINGTON, D.C. – When Wendy Bozel’s doctors discovered she was pregnant, they strongly advised her to get an abortion. The unmarried, 20-year-old fashion model had earlier undergone tests that medical experts predicted would cause her unborn child to have developmental disabilities and physical deformities.

“They told me it would be considered a therapeutic abortion,” the now 49-year-old Bozel remembered.

Although she made an appointment with an abortion clinic, Bozel ultimately changed her mind after talking it over with her mother, Ruby Wilson.

“Since I was educated about what abortion is and that it is not God’s will to take another’s life, I did not do it,” said Bozel, whose mother frequently brought her to the annual March for Life in Washington, D.C. when Bozel was a child.

“I just prayed for a miracle that she would be healthy,” Bozel said, “not deformed or disabled.”

Ida Bernstein, Bozel’s baby girl, was born in perfect health – an answered prayer, according to her mother.

Bozel was one of thousands of Catholics from the Archdiocese of Baltimore who converged on Washington, D.C., Jan. 24 with an estimated 250,000 pro-life supporters from across the country for the 38th-annual March for Life.

The parishioner of the Catholic Community of St. Francis Xavier in Hunt Valley marched with her two younger daughters, Katrina Bozel, 10, and Alex Bozel, 15 – carrying on the tradition of her mother, a parishioner of Sacred Heart, Glyndon, who also marched with them.

Family members said they cherish the sanctity of life because they know how precious Bernstein’s life is to them.

“I always tell her that God has big plans for her,” said Bozel, noting that her 26-year-old daughter plans to research cancer for the National Institute of Health this summer. Bernstein is pursuing a doctorate in physics at Delaware State University, and is also a member of the U.S. rugby team with dreams of playing in the Olympics.

“She almost didn’t make it into this life,” Bozel said.

This year’s march was held Jan. 24 to allow participants to visit their representatives on Capitol Hill after a noon rally and march along Constitution Avenue to the Supreme Court.

Archbishop Edwin F. O’Brien, who also concelebrated a pro-life Mass, was among the marchers who braved freezing temperatures that stayed in the 20s. The archbishop was earlier part of a pro-life panel discussion at Georgetown University’s Gaston Hall in Washington, D.C. Jan. 23.

From the Baltimore archdiocese, at least 22 parishes sent busloads of marchers. The Archdiocesan Division of Youth and Young Adults distributed more than 1,500 tickets for the Rally for Life at the Verizon Center, which attracted thousands of young people the morning of the march.

Two hundred forty students from Mount de Sales Academy in Catonsville attended the rally, before marching behind a large banner emblazoned with the school’s name and logo. It was the 25th year Mount de Sales has participated in the annual event.

The day before the march, Mount de Sales students joined their counterparts from Mount St. Joseph High School in Baltimore and St. Cecilia Academy in Nashville for a pro-life vigil at Mount de Sales.

“We’re trying to change the hearts of people to realize that life begins at conception,” said Corinne Purcell, an 18-year-old Mount de Sales senior and a parishioner of Our Lady of Perpetual Help in Ellicott City.

Purcell said the pro-life message strikes home for her because her two younger brothers are adopted.

“It shows there is another option,” she said, “and you don’t have to get rid of your child in that way and that adoption is the better option.”

“When I say ‘pro’ you say ‘life,’” she bellowed, inspiring surrounding youths to yell “life!” and erupt into cheers.

During the rally on the National Mall, House Majority Leader Eric Cantor of Virginia noted that last November’s elections brought in “the biggest pro-life freshman class in memory.”

Members of the House pledged to institute a government-wide ban on the use of federal funds for abortion, said Cantor. He acknowledged that any pro-life legislation will face an uphill battle in the Senate and with President Barack Obama, a supporter of keeping abortion legal, but “the people’s House will stand unapologetically for life.”

Nellie Gray, the 85-year-old founder of the March for Life, called it “an evil” that more than 50 million abortions have been performed in the United States since Roe.

Gray expressed disappointment with the statement the president issued Jan. 22, in which he noted the anniversary of Roe, “the Supreme Court decision that protects women’s health and reproductive freedom, and affirms a fundamental principle: that government should not intrude on private family matters. I am committed to protecting this constitutional right.”

She said pro-life supporters had come to Washington to bring their message to Obama “with love, and we’re willing to work with you … as the president of all the people, including the preborn.”

Anthony Gage, a 15-year-old homeschooler who attended the march with parishioners from St. Agnes in Catonsville and St. William of York in Baltimore, was encouraged to see so many people standing up for life. It was his first march.

“It makes me a better Catholic,” he said. “I think it changes people’s mind a lot – in the way they think about being Catholic and in the way they act. Young people are even more than 100 percent pro-life.”
As in previous years, the march seemed dominated by Catholic participants. Numerous religious sisters and priests could be seen along the route – along with people praying the rosary, holding crucifixes and carrying signs donated by the Knights of Columbus. Bundled-up participants from the Baltimore archdiocese wore neon yellow stickers with the archdiocesan seal.

Ida Bernstein, whose life was spared after her mother opted against an abortion, said her thoughts and prayers were with the marchers. She was at college and could not attend.

“For me, it’s very personal because I came extremely close to being aborted,” she said, “and I think this experience solidified my family’s position on the issue.”

Bernstein called her mother and grandmother “two of the most selfless people I know.”

“They are both very strong in their faith,” she said. “Those two things are why I am here and why I am able to have life.”

Catholic News Service contributed to this story. Visit www.CatholicReview.org/matysekblog for video coverage of the March for Life.