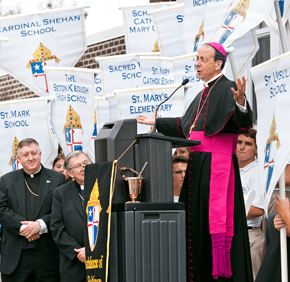 The archbishop announced that $64 million of the $100 million effort has already been raised – even though the campaign is only one third complete. The funds will provide resources that will support Catholic education, service to the poor, evangelization and other outreach, he said.

“When I went to bed last night, I said, ‘Thank you Jesus!’ ” Archbishop Lori said. “What a great gift. That puts us at 64 percent of our goal. This represents incredible generosity, and this doesn’t come without extraordinary vision and leadership.”

Archbishop Lori thanked his predecessor, Cardinal Edwin F. O’Brien, for recognizing the need for the campaign and providing the “foundational leadership” for launching it.

Twenty-nine of the 42 parishes that have completed the campaign have exceeded their goals, with the average parish raising 124 percent of its goal. The average parishioner gift was nearly $4,500, according to the archdiocesan development office.

“I know that we are doing this in a time of great challenge for all of us,” Archbishop Lori told the Catholic Review, “but I’m most grateful for all of the cooperation that the campaign has received.”

The archbishop called the campaign a “wonderful opportunity” to support local parishes and the larger mission of the church.

Eighty percent of the funds raised through the parish campaign are designated for the archdiocesan case elements, with 20 percent remaining in the parish. Once a parish reaches its goal, the percentages are reversed and the parish keeps 80 percent of what is raised beyond the goal.

Asked where the capital campaign would position the ministries of the archdiocese in the coming years, Archbishop Lori said he hoped it would allow Catholic Charities of Baltimore to continue to be the third-largest Catholic Charities in the United States and that Catholic schools would experience “not only stabilization, but growth in numbers and in excellence.” He added that he prays that the number of vocations would “grow exponentially over the coming years.”

Archbishop Lori noted that parishes have been weathering economic challenges “for quite a while now.” He hopes the campaign will help them “get to a period where they could breathe a little easier.”

Patrick Madden, executive director of the archdiocesan development office, is impressed by the strong support in parishes that have already launched the campaign. Pastors, lay leaders and people in the pews have been “outstanding advocates and benefactors of our case,” he said.

“It’s just amazing to me how our Catholic faithful have responded in these tough times,” Madden said. “They’ve made the difference in meeting our early goals. They are a blessing for the church.”

The archdiocese has received several significant leadership gifts, the largest of which was a $5 million contribution. There have been eight gifts of $1 million or more and 82 gifts of $100,000 or more, according to the development office.

The need for a capital campaign in support of education was “strongly recommended” in the Strategic Plan for Catholic Schools, produced by the Blue Ribbon Committee that was formed by Cardinal O’Brien in 2008. The committee was charged with looking at ways to strengthen Catholic schools, Madden said, and the campaign is providing the resources needed to realize many of the goals in the plan.

The $50 million designated for education in “Embracing our Mission – Shaping our Future” will be disbursed as follows:

Dr. Barbara McGraw Edmondson, superintendent of Catholic schools told the Catholic Review that the campaign is a “wonderful” show of support for Catholic education.

“It allows us not only to make our schools accessible to our students,” she said, “but really to make sure our schools are the best out there as the world is changing and technology is integrated everywhere and new skills are needed in the workplace.”

“We have tuition assistance available,” she said, “but it’s just never enough. If we have more funds available to support families, then we can honestly say that every family that desires a Catholic education will have a Catholic education because of the support of the community around them.”

Following the launch of the campaign, Archbishop Lori blessed Archbishop Borders School – a dual-language institution that relocated to the campus of Sacred Heart of Jesus – Sagrado Corazón de Jesús this school year.

Parishes that have not yet participated in the campaign will begin their efforts in several blocs that have campaigns beginning at various times in 2013 and 2014.

Archbishop Lori said all gifts, no matter their size, are welcome. He encouraged all Catholics to pray for the success of the campaign and for God’s blessing on the mission of the church.

“What in the church succeeds well without prayer?” he asked.