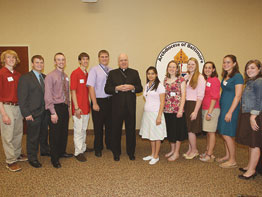 Brendan Young wasn’t seeking awards when he assumed a major leadership role for the youth group of St. Margaret in Bel Air.

When 17-year-old Brendan taught religious education classes, engaged in peer ministering at his parish and started a social justice club at The John Carroll School, Bel Air, he still wasn’t aiming for stardom.

Brendan and many other active youths and young adults were honored July 24 at the Eagle of the Cross ceremony at the Catholic Center, the Baltimore archdiocesan headquarters. He took the accolade in stride, as he saw voids in the world and tried to fill them.

“On some level, you always feel like you’re going to come in and be a superhero when you help out,” said Brendan, who will attend La Salle University in Philadelphia in the fall on a service-based scholarship. “You never feel that way when you walk out. It’s more about making people happy than making yourself happy.

“You feel they helped you a lot more than you helped them.”

Brendan was one of this year’s 25 recipients of the Eagle of the Cross, which is for those who exemplify apostolic mission, Christian leadership and moral integrity.

The awards were handed out by Archbishop Edwin F. O’Brien, who asked the honorees to return to their home parishes and schools and tell about their elite award.

“I know the criterion was hard, so there’s nothing cheap about this,” said Archbishop O’Brien, before encouraging them to take more action in their communities.

Casey Wheltle, 18, of St. Mark in Catonsville, was not a stranger to Archbishop O’Brien when she received her award. The recent Mount de Sales, Catonsville, graduate, who will soon enter Mount St. Mary’s in Emmitsburg, was one of two young people shown greeting the archbishop on EWTN during his Baltimore installation last year.

The active youth group member was part of advisory committees at her high school to stir involvement in archdiocesan programs, and she plans to take part in the campus ministry program in college.

“I like working with young people who are learning about the church,” she said. “I am a big advocate of leading by example. If you advocate something that is meaningful to you, other people are going to catch on, and they’re going to think that’s really cool too and want to learn about that.”

Mark Pacione, director of Youth and Young Adult Ministry for the archdiocese, said Brendan and Ms. Wheltle can serve as examples for taking care of others physically and spiritually.

“It’s important that we identify and honor kids for their leadership ability,” Mr. Pacione said, “We have so much in our church to do, it’s not like we need some leaders. We need everybody taking their turn in leading us in important work.”