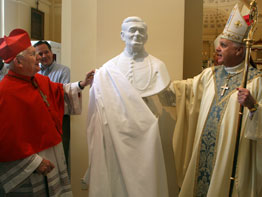 When Bishop John Carroll took possession of what was then the Diocese of Baltimore in December 1790, America’s first Catholic bishop faced tremendously daunting challenges. With few resources, he was called to build parishes and schools, raise a native clergy and meet the pastoral needs of a diocese that encompassed the entire country.

By the time the diocese was raised to archdiocesan status in 1808, it was clear the newly elevated Archbishop Carroll was more than up to the task. In his 25 years as spiritual shepherd, Archbishop Carroll founded three colleges and two seminaries, cared for a Catholic population that doubled in size and strongly promoted the foundation of many religious orders – among numerous other accomplishments, according to Archbishop Edwin F. O’Brien.

In an April 13 celebration of the 200th anniversary of the raising of the Baltimore diocese to archdiocesan status, Archbishop O’Brien said there are numerous challenges that face Catholics today that are no less daunting than those of two centuries ago. But just as Catholics persevered then with faith and prayer, so, too, do believers today.

The bicentennial Mass was celebrated at the Basilica of the National Shrine of the Assumption of the Blessed Virgin Mary in Baltimore – the country’s first Catholic cathedral established by Archbishop Carroll and restored by Cardinal William H. Keeler.

Following the liturgy, Archbishop O’Brien dedicated a white marble bust of Cardinal Keeler honoring the cardinal for his contributions to the archdiocese and the basilica.

In his homily, Archbishop O’Brien said Catholics cannot rest and never have rested “contently and complacently in our secure sheepfold.”

“Indeed in our midst are pastures poisoned with drugs, dark valleys overwhelmed with the hopeless homeless, fields plagued by abortion mills, reverberating with gunshots and murders,” he said. “There are tables not filled, but empty of food both for the physically hungry and for the spiritually starved.”

Those challenges are not solely in pockets of Baltimore City, the archbishop said, but in areas large and small, urban and suburban, “indeed in all counties of our great archdiocese.”

Catholic Charities does a great job reaching out to the poor and vulnerable, the archbishop said. Priests, deacons, religious and laypeople have also zealously lived the Gospel, he said.

But just as Archbishop Carroll needed priests 200 years ago, Archbishop O’Brien said, so, too, does the archdiocese need men to give their lives to God as priests today. He encouraged young men in particular to consider the religious life.

“Baltimore is as much a missionary diocese now as it was 200 years ago,” said Archbishop O’Brien. While there are countless more structures and programs, he said, “we are ever in need of more hearts and souls convinced that as Christ the Good Shepherd laid down his life to save his sheep, so must each of us strive, by virtue of our very baptism, to do the same.”

After the celebration, many people admired the 250-pound, life-size bust of Cardinal Keeler. Sculpted by 27-year-old Nate Risteen, the art shows a smiling Cardinal Keeler wearing the pectoral cross of Archbishop Carroll.

Mark Potter, executive director of the Basilica of the Assumption Historic Trust, said the sculpture resulted from the cooperation of the Historic Trust and the cardinal’s family, who both wanted to honor the cardinal.

“The (family’s) interest in gathering funds for some remembrance of him, and the trust’s desire to also honor him with a bust, brought about this perfect solution,” he said.

More than 20 members of the cardinal’s family were on hand for the dedication, many of them snapping photos as Archbishop O’Brien and Cardinal Keeler pulled off a white garment to unveil the bust.

Dr. Louis Keeler, a cousin of the cardinal, said his family is immensely proud of Cardinal Keeler’s many achievements.

“I’m certain books and papers will be written about the Keeler years of the American Catholic Church,” he said.

Cardinal Keeler thanked participants for attending the Mass and dedication. He told The Catholic Review he was very happy to see the history of the archdiocese being celebrated with a Mass, archival display, lectures and more.

“I’m very delighted that Archbishop O’Brien is emphasizing the many aspects of our history during this bicentennial year and especially calling for a study of the documents of the Second Vatican Council, which I was blessed to attend,” he said.