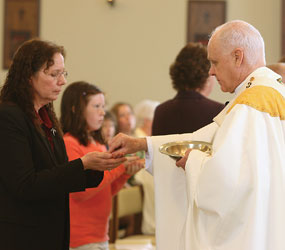 When Father Samuel V. Young invited parishioners of St. Joan of Arc in Aberdeen to extend to others the sign of peace during Mass the weekend of May 2 and 3, those gathered looked around in confusion.

Some bowed in the direction of lifelong friends. Others waved.

“They kind of didn’t know what to do,” Father Young said.

Such is the temporary life for Catholics in the Archdiocese of Baltimore, as local health officials work to curb the spread of the H1-N1 flu virus, also known as the swine flu.

According to the Maryland Department of Health and Mental Hygiene, 15 people have been stricken in Maryland.

According to Catholic News Service, the outbreak originated in Mexico, which had 590 confirmed cases of the virus and 25 flu-related deaths.

Officials there said the number of new infections was dropping. As of May 4, the United States had more than 280 swine flu cases with one flu-related death.

Pope Benedict XVI said he was praying “for the victims of the influenza that is affecting Mexico and other countries.”

In Maryland, five public schools closed because of probable cases, including one in Baltimore County and another in Anne Arundel County.

Many of the cases were within archdiocesan borders, prompting Archbishop Edwin F. O’Brien to send a letter to clergy, religious and laity April 30.

The archbishop asked parishes to take precautions in order to prevent possible spread of the flu virus.

Among the recommendations: receiving the Eucharist only by hand; no personal contact during the sign of peace; ordinary and extraordinary ministers of Holy Communion sanitizing their hands; disposing of holy water; and those who are sick forgoing Mass as an “act of charity.”

“It is hoped that these safeguards will help to ensure that our churches do not contribute toward the spread of the swine flu and that these measures will only need to be in place for a short time,” the archbishop wrote.

“Please join me in praying for all who have been impacted by this illness, especially our sisters and brothers in Mexico, as well as the many medical professionals providing care and assistance here in Maryland and throughout the world.”

The letter can be read at www.catholicreview.org.

At St. Clare in Essex, consecrated wine was available, including the morning of May 2, when 31 children celebrated first Holy Communion.

“You’re still going to be covered,” Father Gosnell said before making his way up and down the aisles, “because we’ll be blessing you with the Easter holy water.”

During general intercessions, a prayer was made for Mexico and its people, and the sign of peace was noticeable by its absence.

Redemptorist Father Andrew Carr, associate pastor of the Catholic Community of St. Michael and St. Patrick in Fells Point, said parishioners were encouraged to wave to one another during the sign of peace. Parishioners at the 4 p.m. Saturday Mass followed that recommendation, although some at the other Masses preferred to shake hands.

“It’s amazing how difficult it was to get people to shake hands some years ago,” Father Carr said, “but now people are so used to it, they keep doing it.”

Although his parish is made up mostly of Hispanics, Father Carr said he did not hear of any parishioners who had family or friends affected by the flu in Mexico.

Father Young said parishioners adjusted to the archbishop’s recommendations. Still, he said he and parishioners missed the connection of shaking hands and embracing one another.

“The shaking of hands, whether it’s at the sign of peace or when you are coming in or leaving, is a gesture that is very meaningful just in terms of friendliness,” Father Young said. “I think people missed that part.”

Sean Caine, the director of communications for the archdiocese, said that the archbishop’s recommendations will remain in place indefinitely.

“These are temporary precautions and it is hoped that they will not need to be in effect for long,” Mr Caine said. “As long as the threat remains at the current level, these precautions will remain in place.”

Paul McMullen and George Matysek contributed to this story.