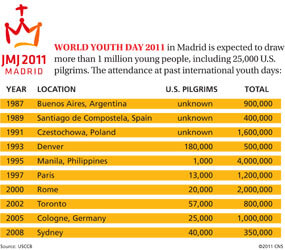 When Marimar Trejo is surrounded by a million young people at World Youth Day in Madrid Aug. 15-23, she will not only represent the Archdiocese of Baltimore, but thousands of young Hispanic immigrants to the U.S. who can’t travel because they lack documentation.

“I have never been to World Youth Day,” said Trejo, a 31-year-old Mexican immigrant and a parishioner of St. Joseph, Cockeysville. “One of my goals, three or four years from now, is to bring more people.”

Trejo said many of her immigrant friends have been celebrating her travels.

“We know that it doesn’t matter who can go, the Holy Spirit is the same and we want to enjoy this journey,” Trejo said. “For me, I will be able to share that experience with them. I feel like I’m very blessed to have this opportunity.”

The Archdiocese of Baltimore’s contingent to World Youth Day, which is led by Pope Benedict XVI, will consist of 26. Mount de Sales Academy in Catonsville and St. Mary’s High School in Annapolis are taking sizable groups, and Archbishop Edwin F. O’Brien is also expected to attend.

The U.S. Conference of Catholic Bishops said the U.S. is expected to send more than 29,400 pilgrims, a record number for the nation at a World Youth Day outside the country.

World Youth Day was founded by Blessed Pope John Paul II in 1985 and has become a Catholic Church tradition. It was most recently held in 2008 in Sydney, Australia.

“There are so very few experiences like this, it is hard to have any real framework of expectation,” said Scott Miller, the director of the archdiocesan Division of Youth and Young Adult Ministry. “They will be, perhaps for the first time, where their faith really matters to everyone surrounding them at an event.

“Participants might have had an experience of being in a youth group or a diocesan or national event where being Catholic was valued. The culture of World Youth Day is an immersion experience involving the Eucharist, catechesis and teaching about Jesus, and celebrating the joy and energy of being young and Catholic.”

Odds may seem slim, but archdiocesan travellers hope for an interaction with Pope Benedict.

“Many of our previous participants have been fortunate to get very close to the pope,” said Miller, who added that the young people will have a deeper awareness of the universal Catholic Church.

Pilgrims from parishes such as Cathedral of Mary our Queen in Homeland, St. Veronica in Cherry Hill and St. Ann in Hagerstown attended an archdiocese-sponsored planning meeting July 31 at the cathedral. Pilgrims were given group shirts marking the contingent’s World Youth Day trip, crosses and flight tickets.

Pilgrims were also told what supplies to bring.

“I’ve got to shop,” said Erin Cain, 16, one of six pilgrims from the cathedral.

Cain said she looks forward to the enormity of the gathering.

“It’ll be cool to be meet people from all over,” she said. “Just being exposed to that many people will be awesome.”

“It was really exciting,” said cathedral parishioner Will Warner. “We can’t wait.”

In Madrid, the largest city in Spain, pilgrims will attend a series of workshops and engage in a series of spiritual and educational exercises. Pilgrims will take part in a vigil Aug. 20, after a five-mile walk to a former air base. The next day, the pilgrims will awake and prepare for Mass celebrated by Pope Benedict.

Cathedral parishioner Eva Lopez, 16, is already looking forward to it.

“Sleeping under the stars,” Lopez said, “and seeing Mass celebrated by the pope will be amazing.”

Matt Palmer will travel with the Archdiocese of Baltimore to World Youth Day, filing regular stories for CatholicReview.org and posting up-to-the-minute updates, audio and video on CatholicReview.org/palmerblog.