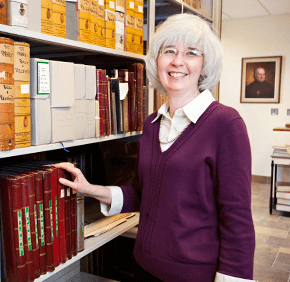 By George P. Matysek Jr.
gmatysek@CatholicReview.org
Twitter: @ReviewMatysek
It’s no small task to inventory more than 7,000 linear feet of archival material, much of it housed in large boxes each containing anywhere from 500 to several thousand documents.
Yet, that was precisely Tricia Pyne’s assignment 11 years ago when the archival collections of the Archdiocese of Baltimore, St. Mary’s Seminary and the U.S. Province of the Sulpicians came together under one roof inside a new, state-of-the-art building at St. Mary’s Seminary in Roland Park.
In confirming what was in the collection, Pyne helped uncover new findings including a long-forgotten letter of Cardinal Henry Newman, a famous 19th century Anglican convert to the Catholic Church.
“It was a hidden treasure that had been mixed into a box of miscellaneous things,” remembered Pyne, archivist of the Archdiocese of Baltimore. “In some of the sacramental registries that had been transferred here from St. James the Less (a closed Redemptorist church in Baltimore), we discovered the entries that had been made by St. John Neumann and Blessed Francis Seelos.”
Preserving and uncovering the past are important missions of what is known formally as The Associated Archives at St. Mary’s Seminary and University.
Since the Archdiocese of Baltimore was the founding diocese of the United States, once encompassing the entire country, its archives are home to some of the most significant documents in the nation.
The collection includes the papal bull issued by Pope Pius VI naming John Carroll the first bishop of the United States. A handwritten letter from President George Washington to Catholics of the United States is also preserved, as are U.S. Capitol architect Benjamin Henry Latrobe’s original design drawings for Baltimore’s Basilica of the National Shrine of the Assumption of the Blessed Virgin Mary, the first cathedral in the new country.
The collection contains more than 70,000 letters of Cardinal James Gibbons and microfilmed copies of The Catholic Mirror and the Catholic Review, newspapers of the Baltimore archdiocese. The Mirror was published from 1850 until 1908, with the Catholic Review beginning publication in 1913.
“Those who want to understand where we came from and how we developed the way we did need access to the documents to tell the story,” said Pyne, sporting an ever-present sweater in the cool, climate-controlled archives.
In the last year, the archives received nearly 4,000 research requests. Approximately 170 researchers visited the archives in person.
“It ranged from everyone from the academic researching a book or a student doing a dissertation to the parish historian researching for an anniversary,” said Pyne, who is assisted by Alison Foley, associate archivist. “A lot of genealogists also come to research their lineage.”
The National Weather Service visited to reconstruct Baltimore-area weather in the late 18th century by combing through the diary of a Sulpician priest.
Pyne, who holds a doctorate in U.S. history from The Catholic University of America in Washington, D.C., noted that the documents tell a fascinating story of how the Sulpicians, an association of priests that specializes in the education of seminarians, played a critical role in church history dating back to the American Revolution.
“You can see just how involved they were in the development of the church,” she said, “in the training of priests and the encouragement they gave to so many women religious. They are right there in the ministry to black Catholics in Baltimore.”
Documents produced early in the history of the country were written on high-quality paper, Pyne said, and are generally in good condition. In the 19th century, however, there was a switch from linen, cloth-type paper to a very acidic paper that turns brittle in time.
“The papers from the late 19th century to the early part of the 20th century are at greatest risk because they are literally disintegrating,” she said, noting that many important documents have been copied on microfilm and the originals are carefully stored in acid-free folders.
Pyne, a parishioner of St. Ignatius in Baltimore, said she is delighted to have a “very interesting” job.
“You don’t get bored,” she said with a smile.
Sidebar: Rome connection
In commemoration of the 50th anniversary of the opening of the Second Vatican Council, Pyne has been serving as the U.S. coordinator on a project of the Pontifical Committee for Historical Sciences and the Center for the Study of and Research on the Second Vatican Council of the Pontifical Lateran University to promote scholarly archival research.
In the United States and Canada, Pyne said, dioceses and eparchies have been contacted and invited to fill out a census prepared by the project that will ask for a brief description of any papers they hold of a council father or advisor.
“Responses will be forwarded to Rome where they will be entered into a database that will contain the information from around the world,” she said.
Copyright (c) June 20, 2013 CatholicReview.org
PrevNext