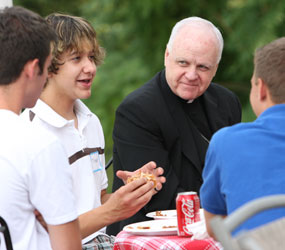 God has a purpose for each person he creates. It’s our job to discern what that purpose is and live it out faithfully.

That’s the message Archbishop Edwin F. O’Brien delivered to 18 teens and young adults during a special July 14 gathering on vocations held in the Clarksville home of Carolyn and Lorenzo Ascoli.

It was the second time the archbishop met with young people in a family residence to share an informal dinner and discussion as part of a newly launched vocations-awareness effort. He will visit several more homes across the archdiocese in the coming months.

“As unique as your fingerprint, so special and carved out from all eternity is what God wants you to do with your life,” said Archbishop O’Brien, seated in a living room as the youngsters surrounded him on steps and furniture.

The archbishop recounted how he served as a military chaplain soon after his ordination. As he highlighted his three weeks of training to learn how to jump out of an airplane, a young man in the audience called the archbishop’s experience “awesome.”

“It’s amazing to gain so many insights from the archbishop,” said Nick Sungensis, a 19-year-old parishioner of St. Louis in Clarksville and a student at Howard Community College.

“He’s been around the block and he’s had a lot of experiences,” Sungensis said. “It’s great seeing that he’s a cool guy who jumped out of airplanes.”

Sungensis said he finds a lot of joy mentoring high school students and teaching Vacation Bible School. He is attracted to a life of service.

“I always enjoy helping people spiritually,” he said. “I just see the priesthood as a vehicle to do that.”

“I think young people are willing to make great sacrifices if they see the need,” he said, noting that it’s “selling people short” to suggest they are unable to live the celibate life.

“I could not see myself doing what I’m doing and having the freedom to be completely and totally available if I were a married man,” he said.

Monsignor Luca showed the young people a gold chalice used at St. Louis that is inscribed with the names of six sons of the parish who became priests for the Archdiocese of Baltimore.

“There’s a lot of room on the bottom for more names,” joked Archbishop O’Brien.

All but one of the dinner participants hailed from St. Louis parish, a faith community that has three men currently studying to become archdiocesan priests.

Tyler Welsh, a 15-year-old parishioner of St. Francis of Assisi in Fulton and a rising sophomore at Loyola Blakefield in Towson, said it was an honor to talk with the archbishop and meet other like-minded young people.

He doesn’t talk about the priesthood with his friends, he said.

“My friends would laugh in my face,” he said. “So, it’s nice to be in the midst of other people who are actually thinking of becoming priests.”

Meg O’Neill, adult enrichment director of Holy Family in Davidsonville, came up with the idea of bringing the archbishop into the homes of Catholics. It provides a relaxed atmosphere for discussion, she said.

“Some may not feel comfortable driving to Baltimore to attend the formal discernment dinners,” she said. “The vocations office has really embraced this idea.”

Father Gerard Francik, vocations director, advised the youths to pray as they discern what God wants of them. He distributed a prayer for vocations and other resource material.

“We’re not put here by accident,” he said. “We’re given gifts and talents to make a difference in the world. For some, that could be as a doctor, a musician or novelist. For others, it could be as a priest.”