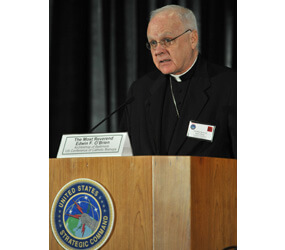 Archbishop Edwin F. O’Brien addressed a symposium connected with the Defense Department July 29, when he called for a nuclear policy that will “bring us closer to a world without nuclear weapons.”

He said, “There are a number of morally significant signposts for our nation as it walks with the international community along the path to zero.”

He was one of several speakers at what was noted by its organizers, the U.S. Strategic Command, as the first of what is to be an annual symposium on nuclear deterrence. Archbishop O’Brien spoke the day after The Catholic Review went to press.

In a July 27 interview with The Catholic Review, he said it is significant that the military segment of society is pursuing this issue.

Archbishop O’Brien was a civilian chaplain at West Point and served as an Army chaplain, with a tour in Vietnam from 1971-72. Before becoming archbishop of Baltimore, he was archbishop of the Archdiocese for the Military Services of the United States.

A member of the U.S. Conference of Catholic Bishops International Committee for Peace and Justice, he brings that military experience to the bishops’ deliberations and said they are often surprised that the military seeks the same goals as does the church.

In his address in Omaha, he said his task was to bring moral questions to bear, “as we seek to build lasting peace in the shadow of nuclear weapons with all their massive destructive potential. … I bring the voice of a pastor and teacher, not an expert analyst or policy maker.”

Archbishop O’Brien told The Review that there is an urgency to renew the Strategic Arms Reduction treaty, set to expire this year. He noted in his address that President Barack Obama and Russian President Dmitry Medvedev have both committed to working toward reducing strategic warheads and delivery vehicles.

However, the archbishop added, other nations are not necessarily heeding the same call. “It’s probably taking place as we speak in some parts of the world,” he said.

Iran, although a signer of the Nuclear Non-Proliferation Treaty, claims to use nuclear material for only peaceful purposes such as nuclear energy, but is widely believed to be developing weapons. North Korea has been testing missile launches. Archbishop O’Brien said multilateral talks are needed so that claims about peaceful uses for nuclear material are verifiable.

“Iran is not transparent; neither is North Korea,” he added.

Asked whether the possibility that some nations might have access to nuclear arms means that stronger ones need to retain their capability, the archbishop acknowledged that has to be taken into consideration. He noted, however, that the U.S. has more than 2,000 nuclear warheads and that it needs to negotiate the reduction while putting political and economic pressure on rogue nations and organizations with nuclear potential not to develop weapons.

He noted, “ Nuclear weapons can be dismantled, but both the human knowledge and the technical capability to build weapons cannot be undone. A world with zero nuclear weapons will need robust measures to monitor, enforce and verify compliance. The path to zero will be long and treacherous. But humanity must walk this path with both care and courage in order to build a future free of the nuclear threat.”

Speaking to The Review, Archbishop O’Brien admitted, “It is permissible to have nuclear weapons to deter a nuclear threat, but if these others (that are developing nuclear capability) come along, I don’t think we can get to zero.”

“We can work toward a better future,” he said. “To keep putting it off is not going to give us a future that’s secure.”

And yet the archbishop cautioned that if other nations, especially smaller nations, have first strike capability, the world is more dangerous, not less. In his talk, he said valid questions might arise about risks “as the world moves toward zero.

“Will moving toward zero increase the strategic value of even a small number of nuclear weapons and make it harder to stop proliferation?” he asked the military audience in Omaha.

“Every country is at stake if that button is pushed by the wrong people,” he told The Catholic Review.

For the full text of Archbishop O’Brien’s speech, “Nuclear Weapons and Moral Questions: The Path to Zero,” visit www.catholicreview.org/subpages/NuclearSpeech.aspx.