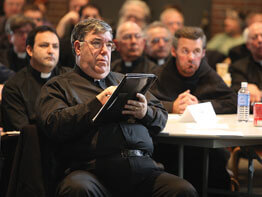 In his opening address, the archbishop told priests that enrollment dropped by 1,000 students in the fall. That accounted for 5 percent of last year’s total student body and double the drop of the last five years, the archbishop said. That is enough to fill four empty schools.

“It was not a shock,” the archbishop told The Catholic Review of his reaction to the numbers. “I presumed there were some longstanding projections (of problems) going on here, as they were everywhere. It was something I couldn’t put off any longer. They’ve been talking it up for years and not enough has happened. It’s going to probably be the most important thing, and the most painful thing, I do here.”

The archbishop nonetheless sounded a hopeful note, saying that a blue-ribbon panel of experts will craft, by June 15, 2010, a plan of action to secure long-term success for Catholic schools.

Archbishop O’Brien recently opened a schools planning office at the Catholic Center. The Feb. 10 and 12 meetings were the first of several, he said, that would involve all “stakeholders” of Catholic education.

Marce Scarbrough, of information services, said enrollment has dropped from 24,381 during the 2001-2002 school year to 19,954 in the current session. Since 2002, the archdiocese has closed 16 schools, the most recent being St. Michael School in Frostburg, which will cease operations this spring.

Nolan McCoy, facilities manager for the archdiocese, said there are 64 schools and 67 campuses in the archdiocese with a total of 130 buildings. He said the schools have the capacity to handle an additional 10,250 students, enough to fill 15 buildings.

Ashley Conley, of the planning office’s fiscal services, said 12 schools are operating with less than $100,000 of combined cash and investments, while one reported a negative balance. Four high schools, she said, reported losses in the 2008 fiscal year.

Average tuition for an in-parish family at an archdiocese school is currently $4,700, while high school tuition averages $9,600, Mr. Scarbrough added.

As students leave, tuition has risen to compensate for their absence. As the economy continues to struggle, families strain to keep up with tuition increases, what Ms. Conley described as a “downward spiral.”

Tuition accounts for 75 percent of revenue, Ms. Conley said, and added it will be harder to meet fixed expenses, like benefits, facilities, instructional materials and telecommunications technology, which account for 92 percent of expenses.

No school closings or consolidations were announced as part of the first meetings. The archbishop said none are planned, but if numbers dictate that a school can no longer function, action would be taken.

In the weeks leading up to the meeting, Archbishop O’Brien appointed local businessman Frank Bramble to co-chair the blue-ribbon committee that would enact the archbishop’s vision for schools over the next 18 months. He also named Monsignor Robert L. Hartnett, pastor of Our Lady of Mount Carmel in Essex, executive director.

Monsignor Hartnett emphasized that a plan is not currently in place for schools.

The committee plans to meet 18 times, according to Mr. Bramble, with the first potentially coming next month.

“Making certain Maryland students and their families have access to the type of education they desire and deserve is of paramount importance to me,” Dr. Grasmick told The Catholic Review. “While my primary responsibility is to Maryland’s 1,400 public schools, I have had a long and wonderful working relationship with our Catholic schools. Their struggles are our struggles. There is much we can learn from each other and, I believe, new partnerships to be forged.”

Pamela Sanders, principal of St. Ambrose Catholic School in Park Heights, was the lone principal chosen to the panel and realizes she carries the hopes of many on her shoulders.

“It’s not a burden,” she said, “but it is an awesome responsibility.”

Many principals and pastors said during the meeting that schools would need to clarify their mission of Catholic education. Baltimore’s 22 percent non-Catholic student population is well above the national average of 13 to 15 percent.

Concerns and optimism about the future of schools were raised during the Feb. 10 and 12 meetings. Summarizing his table’s discussion, one priest worried that 18 months was too long to address the current emergency.

“My goal, our goal, I trust, will be the strengthening of this precious heritage for the years to come,” Archbishop O’Brien said. “Unless we act now, and decisively, we will squander that heritage.”