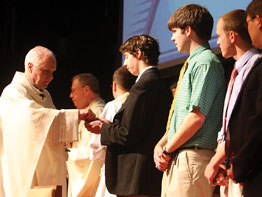 Brother Benedict Oliver, F.S.C., president of the all-boys’ school in Towson, introduced the archbishop, as well as five priest alumni who concelebrated the Mass.

“It’s a great honor for me to be here this morning and salute the tradition of John Baptist de La Salle,” said Archbishop O’Brien. “Hundreds of thousands of lives have changed because of the education and formation you have and are continuing to experience.”

He spoke of the history of 17th century, French-born St. John Baptist de La Salle, who gathered teachers and helped start a home for indigent boys, a community which became known as the Brothers of the Christian Schools.

“It wasn’t easy,” the archbishop said, “but John Baptist de La Salle saw it as an obligation. He saw what needed to be done.”

Brother Benedict said the two objectives of St. John Baptist de La Salle, who was canonized by Pope Leo XIII in 1900, were for “students to learn to live their lives as Christians, and to acquire the knowledge and skills needed for success.”

Referring to the reading from the second letter of St. Paul to Timothy, Archbishop O’Brien spoke of the hardship and opposition Paul faced and said, “Our faith is one generation away from distinction unless we have good Christians.”

“It’s never going to be easy,” the archbishop said. “But Paul begs, ‘Keep that faith, keep that truth and make every sacrifice possible.’”

The archbishop thanked parents, faculty and the Christian Brothers for providing a strong, faith-filled education to students.

“What are you looking for in education?” the archbishop asked. “Wealth, honor, prestige, power or Jesus Christ?”

Following the Mass, the Christian Brothers of the Calvert Hall community renewed their vows.

It was the last day of classes for seniors, who received a special blessing from the faculty and their fellow students.

“Archbishop O’Brien is very good with young people,” said Marc Parisi, the school’s campus minister. “He was very appreciative of the (Christian) Brothers and parents and talked about St. John Baptist de La Salle. I think he gets young people, and they seem to like him.”

Father Seitz, ordained in 1982, said that while he found role models for his vocation at his home parish of Immaculate Heart of Mary in Baynesville, he also found them in the brothers and some of his teachers at Calvert Hall.

“Sometimes at that age, it’s not exactly the coolest thing in the world to tell other people you want to be a priest,” he said. “At Calvert Hall, there was a place where you could speak openly and freely about faith and a commitment to God and a desire to serve God in that way. It was applauded, encouraged and esteemed.

Bishop William C. Newman, retired eastern vicar, is a 1946 graduate of the school.