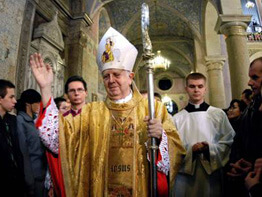 OXFORD, England (CNS) — Archbishop Stanislaw Wielgus has become the new head of the Warsaw Archdiocese, despite findings by a church commission that he collaborated with Poland’s former communist secret police.

“From the material presented, it seems various bad intentions and attitudes about the church are being attributed to me,” Archbishop Wielgus said in a Jan. 5 statement. “This is a falsification. There is absolutely no documentation to prove it, beyond the words of functionaries who viewed my person and the whole issue in their own way.

“I never betrayed Christ and his church in deeds, words or intentions. I never inflicted any harm on anyone,” the bishop said.

An installation Mass was planned for Jan. 7.

The archbishop said he met with the secret police on numerous occasions in the 1960s and 1970s while training for the priesthood and working as a pastor in the eastern city of Lublin and had been “induced by screams and threats” to sign a declaration of collaboration during a “moment of weakness” before traveling to Germany in 1978.

However, he rejected allegations that he had obtained an apartment and study grant for revealing information on fellow clergy and Poles living abroad.

“The insinuations contained in this material that I allegedly planned a lengthy stay abroad for spying purposes are nonsense. Nothing like this ever entered my head,” said Archbishop Wielgus.

“I don’t want to justify myself, and I know I shouldn’t have maintained any relations with the secret services of communist Poland. I also very much regret that I went on trips abroad, which led to these contacts. It seemed to me at the time, however, that I had a duty to undertake useful academic research and training for the good of the church.”

Archbishop Wielgus, previously a medieval philosophy professor, was named Dec. 6 to succeed Cardinal Glemp. A Dec. 20 report by the conservative Gazeta Polska weekly accused him of having been a “trusted collaborator” of the secret police for 22 years.

A church commission said Jan. 5 that it had also seen “numerous important documents, confirming a readiness for deliberate and secret collaboration” and indicating that “collaboration took place.”

The commission said secret police collaboration had been banned under communist rule by the Polish bishops’ conference. It added that it had no direct evidence that then-Father Wielgus’ activity had “caused damage to anyone” but said it was possible new material on his role could be found and analyzed.

The allegation was deplored by priests from the Plock Diocese, where he formerly was bishop, and officials from Poland’s Catholic University of Lublin, where Archbishop Wielgus was rector from 1989 to 1998.

A Vatican statement also rejected the allegation Dec. 21. It said the pope had shown “full confidence” in Archbishop Wielgus, after Vatican officials took “account of all his life circumstances, including those connected with his past.”

However, Janusz Kochanowski, the Polish government’s commissioner for civil rights, said in a Jan. 4 statement that his own commission had concluded there was “no doubt” about the archbishop’s “deliberate secret cooperation” with the Interior Ministry’s Department Four, which monitored and controlled church activities.

Poland’s National Remembrance Institute, which has control of secret police archives, estimates that 10 percent of Catholic clergy acted as informers under communist rule.

Several senior priests and two other bishops were named in newspapers during 2006 as suspected informers. In November, Bishop Wiktor Skworc of Tarnow denied collaborating after his name was found in secret police files.

In a Jan. 5 survey by Poland’s Dziennik daily, 67 percent of Poles said they believed former collaborators were unfit for high office in the church, while 46 percent said they would be reluctant to make their confession to an ex-informer.

However, 20 percent said there was no need for the archbishop to resign.