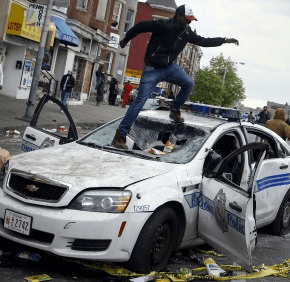 “I think it shows a real commitment on the part of the people to pray,” said Monsignor Richard Bozzelli, pastor of St. Bernardine, the scene of the revival.

Monsignor Bozzelli said that Deacon B. Curtis Turner, principal of St. Frances Academy in East Baltimore, preached about the hapless disciples, terrified in a boat in a storm, as they witnessed Jesus walking on water.

“Little did he know when he was preparing that, what storm we would be dealing with,” the pastor said.

As the April 27 funeral services concluded for Freddie Gray Jr. – the 25-year-old Baltimore man who died April 19 of injuries sustained while he was in police custody – the storm hit Baltimore. At noon, while the funeral was still in progress, police reported that a group had gathered near Mondawmin Mall, in northwestern Baltimore. Across the country, people watched on television as the confrontation grew violent, with the group throwing bricks and rocks at police officers who stood shoulder-to-shoulder in riot gear. The police reported injuries to officers, including broken bones, from conflicts near the mall and in the surrounding neighborhoods.

As the afternoon continued, violence and mayhem escalated, especially along North Avenue. At 1:30 p.m., police reported on Twitter that one of their patrol cars at Pennsylvania and North avenues was surrounded by a large group, which destroyed the car.

The situation in that vicinity grew worse, with multiple vehicle fires reported, as well as looting of nearby businesses. The CVS near the intersection was engulfed in flames by early evening, and police reported that firefighters battling the blaze also had to contend with individuals who had cut the fire hose.

Other businesses were looted and cars burned. Benedictine Father Paschal Morlino, pastor of St. Benedict, located at 2612 Wilkens Ave. in West Baltimore, lamented the destruction of nearby local businesses, including Rite Aid, Dollar General, Shoe City and the Westside Shopping Center, all a stone’s throw from his parish.

“It’s hurting the people who need the jobs the most,” Father Morlino said. “They’re putting people out of work who are in need the most.”

As the sun went down, fires small and large glowed on TV screens nationwide, tuned to the destruction in Baltimore. Though the western part of the city bore the brunt, the east side suffered, too. A three-alarm fire consumed an under-construction senior housing building at Federal and Gay streets. On social media, residents reported looting and destruction in Upper Fells Point along the Broadway corridor, at the Aldi grocery store near Highland Avenue and Pulaski Highway and at several stores on Eastern Avenue.

At 8:30 p.m., Governor Lawrence Hogan announced in a press conference that he had signed an executive order declaring a state of emergency, activating the National Guard to help address the violence and unrest.

Public schools across the city cancelled classes for April 28. The Archdiocese of Baltimore did the same, closing all schools except for the School of the Cathedral of Mary Our Queen, located in Homeland, north of the violence.

Archdiocese schools in Baltimore County near the west side of Baltimore City announced April 28 that, due to the possibility of planned protests in the area, they were closing early, at 1:30 p.m. These schools included St. Agnes School, Our Lady of Victory School, St. Mark School, John Paul Regional Catholic School and Mount de Sales Academy.

News of other cancellations continued April 28. FlowerMart, an over-100-year-old tradition in Mount Vernon, cancelled its annual weekend of flower sales and festivities, scheduled for May 1-2.

As the Catholic Review went to press, no damages were reported to archdiocese properties.

Catholic leaders and community members were disturbed by the violence.

Deacon Turner, principal of St. Frances Academy in East Baltimore, described the irony of first learning of the Baltimore mayhem while in Washington, D.C., on a field trip with his students.

“We were literally standing under the Martin Luther King Jr. Memorial when we heard about it,” he said.

“It’s disturbing because the students see (the violence) on TV, and they know that that’s not the majority of Baltimore youths,” Deacon Turner added. “Sadly, that’s what gets all the media coverage.”

Willa and Brendan Walsh of the Baltimore Catholic Worker Viva House, located at 15 Mount St., said that they received many phone calls and emails inquiring after their safety. They responded in a statement on what they saw as the roots of the destruction.

“The unrest and anger are the results of decades of unemployment (over 50 percent in our ZIP code), decades of miserable uninhabitable housing, decades of under-funded chaotic schools, decades of the drug trade, and, it goes without saying, centuries of racism,” the Walshes wrote.

“The most violent country in the world has produced citizens, unfortunately another generation of young people, who will believe that violence is the solution to all problems.”

Capuchin Franciscan Father Paul Zaborowski, pastor of St. Ambrose in Park Heights, called the previous week, from Gray’s death to the violence of April 28, “a very sad time.”
At Masses on April 25-26, he said that held open conversations with his community.
“People were basically saying the same kinds of things,” he said. “There was a lot of anger and frustration that things never seem to change.”
With regard to the violence, St. Ambrose parishioners observed that rioting and protesting are two completely different things, Father Zaborowski added.
“Mondawmin Mall was the most disturbing, because they had worked so hard to build it up again,” he said.
Father Zaborowski said he will “continue this conversation this week” with his parishioners and surrounding neighborhood.
“We have a prayer for peace we pray here all the time,” he said. “It’s especially meaningful today.”