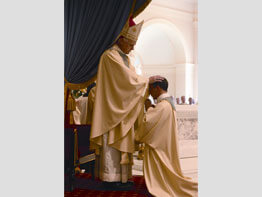 As Deacon Gregory Rapisarda of St. Margaret, Bel Air, stood in the sanctuary of the nation’s first cathedral and watched his son John Christopher Rapisarda become a priest for the Archdiocese of Baltimore June 21, a sense of awe came over him.

“I felt humbled by the grace of God in Father John’s life and in the life of our family,” he said. “I felt the prayers of my wife, Carol, and her intercession, and I’m just happy that she joined with us in today’s prayer.”

Nearly 800 friends and family gathered to witness the ordination of Father Rapisarda, 31, by Archbishop Edwin F. O’Brien at the Basilica of the National Shrine of the Assumption of the Blessed Virgin Mary, Baltimore.

“There are very few moments that combine such solemnity and such joy in one ceremony,” said Archbishop O’Brien, before ordaining his first priest since he became 15th archbishop of Baltimore.

“It’s an exciting day for me, not only as a father, but as a permanent deacon,” said Deacon Rapisarda. “Father John will make a wonderful priest. He’s very dedicated and loving of the church. He’s devoted to the Eucharist, and he loves people.”

“It meant everything,” said his younger sister Joanna Rapisarda after the ordination. “To see what he’s become, and with Mom not being here, I feel like in a sense, we were giving him over to the church.”

Father Rapisarda received a standing ovation after Father Gerard C. Francik, director of vocations for the archdiocese, testified that he was found worthy as a priest candidate.

“That this is taking place is a gift of God to the church of Baltimore,” said Archbishop O’Brien during his homily. “Your ordination, John, gives all of us the opportunity to absorb the meaning of the priestly mystery.”

In one of the first acts of the ordination rite, Father Rapisarda placed his hands in those of the archbishop, and promised respect and obedience to the chief pastor of the archdiocese and to his successors.

Then, as those gathered reverently chanted the Litany of Saints, Father Rapisarda prostrated himself before the altar in an act of humble prayer and an expression of his total dependence on God.

Many found the laying on of hands, when the archbishop lays his hands on the head of the candidate – signifying the conferral of the Holy Spirit – to be the most meaningful moment of the ordination. As a sign of fraternal solidarity, nearly 70 fellow priests also imposed hands on Father Rapisarda.

“I loved watching all the priests lay their hands on him, because you saw the apostolic succession really unfold before your eyes,” said Joanna, a graduate student in theology.

After Father Rapisarda was invested with the stole and chasuble by Father Francik, he knelt before the archbishop, who anointed his hands with chrism.

“God wants your hands so that they may be his own in the world,” the archbishop explained in the homily.

Choking up a bit, Father Rapisarda’s brother, Greg Rapisarda Jr., said, “We’ve created these beautiful ceremonies so we can try to comprehend on a human level what’s really going on – and the communion that it has with Christ and with my mother. This has been an amazing ceremony,” he said. “It affects us on a human level, and I was just trying to imagine what it must be like on the other side, what we can’t see. Like if you think this is majestic, with the trumpets – then imagine the chorus of angels and what that is like. How happy heaven is right now, as well as us here on earth.”

After bestowing blessings upon a throng of people, including friends and family, Father Rapisardsa said, “I think the joy in preparing for ordination can’t match the joy of becoming a spiritual father.”

When asked what kept him smiling as he stood on the altar, the priest responded, “The joy of being a priest, the joy of having my family there – the joy of knowing that my mom was there.”

Father Rapisarda, who attended Mount St. Mary’s Seminary in Emmitsburg, celebrated his first Mass at St. Margaret, Bel Air. He has been assigned an associate pastor to Our Lady of Mount Carmel, Essex.