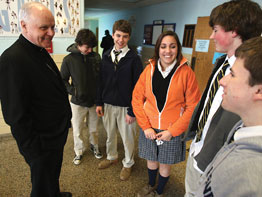 Kicking off Catholic Schools Week in the Archdiocese of Baltimore, Archbishop Edwin F. O’Brien encouraged St. Maria Goretti High School and eighth-graders from St. Mary School to not be afraid “to take a strong stand,” in their daily lives.

During a Mass with the students at neighboring St. Ann, Hagerstown, Jan. 26, Archbishop O’Brien said motivation came from attending the Jan. 22 March for Life in Washington, D.C. where students took to the streets to promote pro-life issues.

“It was a wonderful demonstration of what Catholic schools can and should be doing,” he said during his homily.” “Give yourself to others and for others, and God will take care of you.”

Catholic Schools Week, held Jan. 25 through Jan. 31, serves as a vehicle for schools around the country and archdiocese to promote their positive aspects. The theme this year, Celebrate Service, fit in well with the archbishop’s call for civic-mindedness.

“I thought it was a great message that you’re going to have to go out there in difficult times and stand up for yourselves and not succumb to the temptations,” said St. Maria Goretti principal Richard Fairley.

Catholic students, the archbishop said, must display courage in today’s society, even inside their own schools where peer pressure often rules. He reassured students that Catholic schools are rare in their ability to foster faith and pro-life movements.

“In other places you can’t preach about God,” the archbishop said. “Only here, at St. Maria Goretti, can you do that.”

Mr. Fairley said the archbishop’s appearance at the Western Maryland school, which has an enrollment of 225 students, sent a strong support message to Catholics in the area. There is just one remaining archdiocesan high school west of Hagerstown – Bishop Walsh School in Cumberland.

“I’ve heard so much about the archbishop’s promoting of Catholic education, and this is just another re-enforcement that he means it,” Mr. Fairley said. “I’m sure the fact that he came out here on a day like today, the beginning of Catholic Schools Week, sends a strong statement.”

Archbishop O’Brien mingled with students Jan. 26 for nearly an hour after Mass at a reception inside St. Maria Goretti’s gymnasium.

“It’s a reminder that hard work is going on with great enthusiasm,” the archbishop said. “I saw faculty and some parents were here. Clearly they’re excited about Catholic schools. They’ve come through great sacrifices and they’re happy they’re here.”

Sophomore Christina Carbone said she was “honored” by the archbishop’s appearance. The life-long student of Catholic schools said they have been instrumental in her formation.

“We can be free to talk about our religion and not worry what other people think,” she said. “Even people who don’t believe in what you do are free to say what they think. It’s just comfortable.

Although he celebrated the positive aspects of Catholic schools, the archbishop said there is room for fresh ideas. He is preparing a multi-year plan to revitalize Catholic schools enrollment.

The archbishop will meet with parish priests and school administrators Feb. 10 and Feb. 12 to discuss his vision through consultations. The archbishop said solutions for reversing enrollment declines will take time, but must come through conviction.

“We don’t want anyone to forgo a top education, and we would be doing that if we let the status-quo continue,” he said. “It’s taking a strengthening action because that’s what we’re about.”