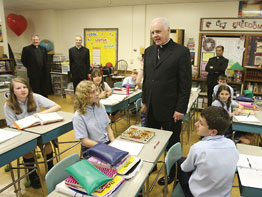 HAGERSTOWN – Standing beneath a large painting of the crucifixion at St. Ann in Hagerstown, Archbishop Edwin F. O’Brien challenged Washington County parishioners to “embrace” the crosses that come into their lives.

Speaking in a March 11 homily during his first stop in a daylong tour of Hagerstown-area parishes and schools, Archbishop O’Brien reminded Catholics they are called to identify the crosses of their lives as gifts from the Lord.

“Embrace them as a way to identify with what Christ did for us,” he said.

The archbishop noted that early Christians were ashamed of the cross. Pagans mocked the cross as a sign of weakness, he said. But Christians came to recognize it as a symbol of strength.

“Sometimes, we’re ashamed of the cross,” he said. “We resent the cross and ask, ‘Why do I have to do this?’”

Part of being a Christian is having courage to identify with the cross, he said.

“Jesus tells us to love our enemies,” he said. “This is where the cross comes into our lives.”

Since his Oct. 1 installation, Archbishop O’Brien has visited about 125 of the archdiocese’s 151 parishes. He plans to visit them all, he said.

“People are very interested in the future of the church and the future of our schools,” Archbishop O’Brien told The Catholic Review. “Their concern is very forward looking.”

At the end of the liturgy, several St. Maria Goretti students asked Archbishop O’Brien to sign prayer cards as he greeted parishioners outside the church. On each card, the archbishop wrote, “Pray for future priests.”

“I feel privileged that we could have him come to our church,” said Chase Bachtell, a 14-year-old freshman and parishioner of St. Mary, Hagerstown.

“We’re not in downtown Baltimore, so being up here is a little different,” she said. “It makes us feel more connected to the archdiocese.”

“We’re supposed to embrace the cross like Christ did and not try to turn away from it. When we drop our crosses, we’re dropping the cross he has given us – they’re meant for our growth and holiness.”