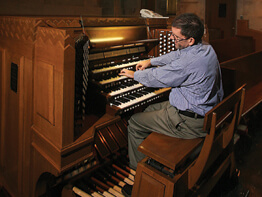 Music from two newly restored pipe organs at the Cathedral of Mary Our Queen, Homeland, will fill the vast church with regal sounds Oct. 28, as Archbishop Edwin F. O’Brien blesses the dual organ system featuring 7, 231 pipes ranging from 32 feet wide to the width of a pencil.
The 12:30 p.m. formal organ re-dedication service will give the new archbishop of Baltimore the honor of blessing the same mighty instruments used to celebrate his Oct. 1 installation.

Festivities celebrating the completion of the $1.5 million restoration by the Schantz Organ Company of Orrville, Ohio, will kick off Oct. 27 with a 7:30 p.m. concert featuring concertos by composers Frances Polenc and Josef Rheinberger.

“We’re all very excited about the completion of the restoration,” said Daniel Sansone, music director of the 48-year-old cathedral. “The sound is spectacular and truly a spiritual experience.”

The restoration was completed nearly a year ahead of schedule for a project that has been in the planning stages for seven years, Mr. Sansone said.

Officials from the cathedral began a dialogue with three organ builders in 2001 to refurbish the aging original organ, which, when it was dedicated in 1959, was the largest combined pipe organ system in the United States.

However, following the events of Sept. 11, the organ renovation plans were put on hold for a more stable time when fundraising efforts would prove to be more fruitful, Mr. Sansone said.

By 2005 the Cathedral was prepared to forge ahead with the project and accepted the bid from Schantz – the oldest American organ company – and first the 5,625-pipe organ and console from the choir loft was sent to the Ohio factory in early 2006.

The rejuvenated organ was reinstalled, re-voiced and tuned by the All Saints’ Day service Nov. 1, 2006, and the smaller, 1,606-pipe organ and console and shipped off to Orville and finally returned in time for Easter services in 2007.

Church officials estimated it would cost $4 million to fund its entire capital improvement campaign – which also includes restoring the stained-glass windows, the heating and air-conditioning system and repairing the church masonry – and the Cathedral exceeded its fundraising goal by more than $1 million, said Jenny R. Lijoi, director of parish development.

“The parishioners really answered the call,” Ms. Lijoi said of the campaign, which was bolstered by significant contributions from both the archdiocese and parishioner Jack Dwyer of North Baltimore.

During the blessing and re-dedication service, Mr. Sansone will play the organ and the cathedral choir will be joined by the Choir of the Church of Redeemer, Homeland, to sing the Solemn Mass in C sharp minor for double organ and choir, written by French Catholic composer Louie Vierne.

“Not only do the Cathedral organs sound spectacular,” Mr. Sansone said, “they also are aesthetic work of true art that will enhance the spiritual and musical life of the cathedral parish for decades to come.”