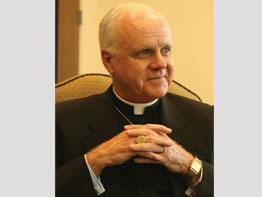 Archbishop Edwin F. O’Brien will participate in two major gatherings this month that are expected to touch on important issues including prayers in the liturgy, stem-cell research, clergy sex abuse and the Eucharist.

The U.S. bishops’ spring meeting will be held June 12-14 in Orlando, Fla., and the 49th International Eucharistic Congress is set for June 15-22 in Quebec City.

Between the two meetings, Archbishop O’Brien will return to Baltimore to participate in a June 14 reunion of area youths who attended events during the U.S. papal visit to Washington and New York. The reunion, which will include Mass and a discussion of vocations, will be held at St. John, Westminster.

Much of the agenda for the U.S. bishops’ meeting will focus on the translation and approval of the Roman Missal for use in the United States, and the bishops are expected to vote on a new translation of the proper prayers for each Sunday and feast day during the liturgical year.

“It will be real progress if we can get finality on the orations,” said Archbishop O’Brien. “We are just about there.”

“It’s a big compromise to destroy life to save it,” Archbishop O’Brien said, referring to the destruction of a human embryo that results from embryonic stem-cell research. The church teaches that human life begins at conception.

The bishops are scheduled to listen to a 45-minute presentation by researchers from the John Jay College of Criminal Justice of the City University of New York on their study of the causes and context of clergy sex abuse in the United States.

The bishops will consider a recommended structure for dialogue between priests and bishops about how the church has handled sex abuse allegations against clergy and how the “Charter for the Protection of Children and Young People,” adopted by the bishops in Dallas in 2002, has been implemented.

“Dialogue should be encouraged,” Archbishop O’Brien said. “It’s important to learn from whatever mistakes and whatever good efforts were made during those tense and highly emotional days.”

Also on the agenda is a presentation on the Center for Applied Research in the Apostolate’s survey on “Sacraments Today: Belief and Practice Among U.S. Catholics” and the Pew U.S. Religious Landscape Survey. The presentation will “give some visibility” to low Mass attendance, the archbishop said.

“We have to ignite a sense of urgency on evangelization throughout our dioceses,” he said.

The Eucharistic Congress will feature presentations on the theology of the Blessed Sacrament, a eucharistic procession through the streets of Quebec and opportunities for eucharistic adoration.

Archbishop O’Brien said he hopes to return from the congress a “holier person” and “better able” to convince others of the centrality of the Eucharist to Catholic life.

Asked about studies that show a high number of Catholics do not believe in the real presence, Archbishop O’Brien questioned the validity of the studies.

“I don’t go along with those that say 65 percent of Catholics don’t believe in the real presence,” said Archbishop O’Brien. “It depends on how the question is asked.”

The archbishop said he has frequently offered funeral Masses and other liturgies attended by inactive Catholics. They show great reverence for the sacrament, he said.

“They know what we believe about the Eucharist,” he said. “Whether they understand all the details of transubstantiation is a technical point. If you ask them if Jesus is really present, Catholics will overwhelmingly say yes.”

In a region of Canada that has become highly secularized, Archbishop O’Brien said he hopes the Eucharistic Congress will foster a sense of “hope and renewal” in Quebec.