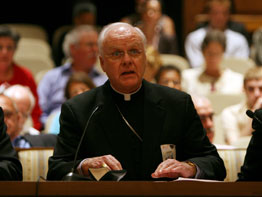 ANNAPOLIS – While others debated the financial costs of maintaining the death penalty in Maryland, Archbishop Edwin F. O’Brien highlighted moral concerns during an Aug. 19 appearance before the Maryland Commission on Capital Punishment in Annapolis.

Testifying in the state capital for the first time since his Oct. 1, 2007 installation as head of the Baltimore archdiocese, Archbishop O’Brien said Catholic opposition to the death penalty is consistent with the church’s respect for the sanctity of human life. He quoted from Pope John Paul II’s 1995 encyclical, “Gospel of Life,” which calls for the defense of life from conception to natural death.

“Woven into the fabric of the (pope’s) exhortation was an appeal to end capital punishment – to stand against the killing of even those who have committed murder and, in so doing, have affronted God’s dominion and denied their own and their victims’ God-given humanity,” said Archbishop O’Brien, accompanied by Bishop Eugene Sutton of the Episcopal Diocese of Maryland and Bishop John Schol of the United Methodist Church of Maryland.

Pope John Paul II taught that “bloodless means” of punishment should be employed to protect society, Archbishop O’Brien said, noting that such means exist in the form of modern prison systems.

Archbishop O’Brien acknowledged that he is a “latecomer” in his opposition to the death penalty, once believing it to be a deterrent. After listening to Pope John Paul II preach against the death penalty during a 1999 visit to St. Louis, the archbishop said he experienced a “moment of conversion.”

Catholic popular opinion on the death penalty is changing “precipitously” since the pope’s encyclical, according to the archbishop. He cited a 2005 Mason-Dixon poll commissioned by the Maryland Catholic Conference showing that while statewide support for the death penalty is 56 percent, statewide preference for sentences of life without parole as a death-penalty substitute stands at 63 percent.

Among Catholics, 53 percent of those polled favor the death penalty, and 71 percent believe the life without parole sentence is an acceptable substitution, he said.

Other faith leaders emphasized that God alone has the right to take life.

In his testimony, Bishop Sutton said Episcopalians believe that “everyone bears the image, or imprint, of God, and the face of Christ is marked on every human being – even murderers.”

“Knowing this, capital punishment to us is tantamount to placing Christ on the cross again and again,” he said, “using the state to sanction our own murderous outrage against those we’ve come to loathe.”

Bishop Sutton insisted that “we are not going to kill our way out of a culture that is awash in violence.”

Earlier in the hearing, commissioners heard testimony related to a recent study by the Washington-based Urban Institute that found death penalty cases cost the state about $1.9 million more than what it costs for a murder case in which the death penalty is not sought.

Headed by Benjamin Civiletti, a former U.S. attorney general, the 23-member death penalty commission has until Dec. 15 to make a final report to the Maryland Legislature with recommendations related to capital punishment in Maryland. Bishop Denis J. Madden, urban vicar, is one of the commissioners.