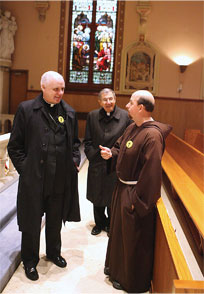 It’s been nearly 100 days since Archbishop Edwin F. O’Brien assumed leadership of the Archdiocese of Baltimore, and in that time he has begun to examine one of the key issues he addressed in his Oct. 1 installation homily – how the church can help Baltimore leaders deal with the problems of the city.

Having toured the city’s 50 parishes, the 15th archbishop of Baltimore has seen a snapshot of Baltimore and its people.

“The contrast is stark really,” Archbishop O’Brien said. “I think anybody who wants to take a walk can find areas with very nice homes, well-kept lawns, good streets and sidewalks, and maybe 15 minutes later find themselves in a neighborhood that is just racked, torn apart, as if a war had just been fought. The poverty, violence, insecurity and fear are evident.”

The poverty, illegal drug activity, violent crime and a homicide rate that is nearly 300 for 2007 are among the urban evils that stand out for the new archbishop as he becomes familiar with Baltimore.

The archdiocese has already demonstrated its commitment to the city of Baltimore, he said.

Though the city is home to nearly one-third of the Catholic churches within the archdiocese, the urban vicariate has 15,868 registered Catholic households – or about 15 percent of the archdiocesan population, according to the most recent statistics available from the archdiocese.

In devising a plan, Archbishop O’Brien is looking at the many programs already in place, what role the church plays in the communities, and how the archdiocese, which includes Baltimore and nine Maryland counties, can employ its resources and develop innovative ideas to help those in need.

“I’m new here. I’m still learning the ropes,” he said, “but I’m very impressed by the reputation the church has throughout the community for advocating for the poor, for bringing our Catholic people throughout the archdiocese together to support programs for the inner city.”

Archbishop O’Brien is particularly enthused about parish partnerships, where suburban churches link with inner-city parishes, help them financially and provide opportunities for congregations and clergy to interact.

“We have to encourage that,” he said.

Archbishop O’Brien has also been impressed with Catholic Charities programs and partnerships the church has formed to help poor residents. He said he was encouraged by parish outreach efforts that make a difference in the community.

The archbishop said he would like the archdiocese to explore “how we can work with others, build coalitions and bring attention to the situation so that outsiders might pitch in and give us some leverage for change.”

The challenge, Archbishop O’Brien said, is “to bring that spirit of hope that comes through the belief in Christ and the sacraments that the church offers.”

In December, he led a prayer at Mayor Sheila Dixon’s inauguration, and he believes the faith community can support city leaders, mainly on a grassroots level.

“Our pastors and our parish communities are in touch with their local leadership and what is going to be done through the legislature and through the city council,” said Archbishop O’Brien, a city resident. “And when it’s time for us to step up and support them, or advocate for them, I think that will be our responsibility. And in the coming year I’m sure that will happen.”

Though political activism is necessary to bring about social change, he said the church should never lose sight that it must spread the Gospel to enrich the lives of the population at large.

“It’s the responsibility of all of us to put a soul in the city, to give a spirit of hope to the city,” Archbishop O’Brien said. “In emphasizing the poverty, we might suggest what is as bad as material poverty is spiritual poverty. And that can exist in any neighborhood and it does exist among the rich as it does among the poor. And the church has to be concerned first of all to bring the spiritual treasure that she has and the sacraments that give meaning to people’s lives.”

Fully aware that he has more to see and experience as archbishop before laying down a concrete city agenda, Archbishop O’Brien continues to be inspired by the urban ministry and outreach of the late Rev. Martin Luther King Jr. and Cardinal Lawrence Shehan, the 12th archbishop of Baltimore who served during the turbulent 1960s.

Though both men met with tremendous anger when they championed civil rights, they continued to fight for social justice, he said.

“They were great examples of how individuals can stand apart from the crowd – even when it’s unpopular to do so,” Archbishop O’Brien said. “Faith has to bring peace and love to serve the Lord. It’s the Lord himself who brought peace and love to the poor.”