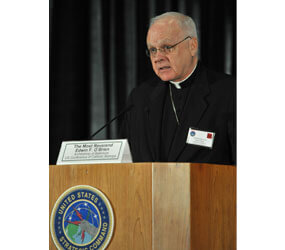 Although he acknowledged that the path to the elimination of nuclear weapons will be “long and treacherous,” Archbishop Edwin F. O’Brien said humanity “must walk this path with both care and courage in order to build a future free of the nuclear threat.”

Speaking Feb. 3 to 200 international leaders who gathered in Paris for the Global Zero Summit, Archbishop O’Brien cited the Second Vatican Council’s condemnation of “total war” and the Council Fathers’ skepticism of “deterrence” as a way to lasting peace.

“Every nuclear weapons system and every nuclear weapons policy should be judged by the ultimate goal of protecting human life and dignity,” Archbishop O’Brien said, “and the related goal of ridding the world of these weapons in mutually verifiable ways.”

Archbishop O’Brien, who served for a decade as the archbishop for U.S. Military Services before coming to Baltimore in 2007, said the goals of “just war” teachings are to “reduce recourse to force and to restrain the damage done by war.”

He noted that “just war” teachings assert that the use of force must be discriminate, with civilians and civilian facilities preserved from direct, intentional attack. The use of force must be proportionate, he said, with the overall destruction not outweighing the good to be achieved. It must also have a probability of success, he said.
“The real risks inherent in nuclear war make the probability of success elusive,” Archbishop O’Brien said. He pointed out that nuclear war is rejected in church teaching because it “cannot ensure noncombatant immunity.” He added that the likely destruction and lingering radiation brought on by nuclear war would violate the “just war” principle of proportionality.

“Even the limited use of so-called mini-nukes would likely lower the barrier to future uses and could lead to indiscriminate and disproportionate harm,” Archbishop O’Brien said. “And the continuing possession of nuclear weapons undermines non-proliferation efforts and contributes to the danger of loose nuclear materials falling into the hands of terrorists.”

The archbishop called on the U.S. to focus on the “next steps” in eliminating nuclear weapons.

“This requires the successful negotiation and ratification of a START follow-on treaty with the Russian Federation, the ratification of the Comprehensive Test Ban Treaty, and the adoption of a nuclear posture that rejects the first use of nuclear weapons or their use against non-nuclear threats,” he said.

Archbishop O’Brien said the Catholic Church’s opposition to nuclear weapons is not new.

“Our church works consistently to defend the life and dignity of all: the unborn, the poor, the immigrant, and persons in every age and condition of life,” he explained. “This moral commitment to protecting human life led to the adoption and development of the church’s “just war” teaching.”

He pointed out that as a permanent observer to the United Nations, the Holy See has ratified the Nuclear Non-Proliferation Treaty and actively participated in the treaty’s review conferences in the last four decades. The archbishop also quoted Pope Benedict XVI, who said in his 2006 World Day of Peace message that in a nuclear war “there would be no victors, only victims.”

The summit was timed to lead up to the Global Nuclear Security Summit in April, convened at the call of President Barrack Obama, and the Nuclear Non-Proliferation Treaty (NPT) Review Conference in May.
Archbishop O’Brien, a member of the U.S. bishops’ Committee on International Justice and Peace, has spoken against nuclear weapons in the past. In July, he told an audience of 500 people gathered for a military-sponsored symposium in Omaha, Neb., that the abolishment of nuclear weapons was an issue of “fundamental moral values that should unite people across national and ideological boundaries.”