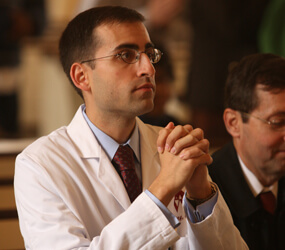 Archbishop Edwin F. O’Brien called on Catholic physicians and medical professionals to “persevere and stay the course” in standing up for the sanctity of life even in the face of “widespread and vociferous opposition.”

Speaking at an Oct. 18 “White Mass” for Catholic medical professionals, the archbishop outlined a litany of attacks on life ranging from abortion to embryonic stem cell research.

As legislators consider health care reform, he called on the nation’s leaders to protect the conscience rights of doctors. He asked them to keep their promise to exclude abortion funding in any reform proposal.

“We support, strongly, universal access to health care to the extent possible,” said Archbishop O’Brien, speaking in a homily delivered at the Basilica of the National Shrine of the Assumption of the Blessed Virgin Mary in Baltimore. “Surely, we can do more than we are now doing, as a wealthy society such as is ours, to reach that goal.”

The archbishop cited public promises by President Barack Obama and Secretary of Health and Human Services Kathleen Sebelius to exclude public funding for abortion in any health care reform legislation. He highlighted the president’s commitment to conscience rights.

“Hopefully, our nation’s executive leadership will actively and unambiguously pursue that pledge,” Archbishop O’Brien said, “(for) indeed, unless specific legislation is passed, the administration’s pledges will prove to be empty.”

Archbishop O’Brien thanked Catholic medical professionals for opposing embryonic stem cell research that destroys human life. He raised concerns that in a state facing “monumental budget deficits and drastic cuts in human services,” Maryland has allotted $12.4 million for the Maryland Stem Cell Research Fund. He noted that “much, if not most” of that funding goes into research “unnecessarily involving the destruction of human embryos.”

The archbishop called attention to a bill in the Baltimore City Council that he said would “perniciously and wantonly target for arbitrary penalties the good work of prolife pregnancy resource centers.”

“It is all too obvious that today’s culture of death tolerates no competition,” said Archbishop O’Brien, who was joined in the sanctuary by Auxiliary Bishop Denis J. Madden.

Attended by about 150 physicians, nurses, medical students, dentists, scientists and their families, the White Mass was celebrated on the feast of St. Luke – patron saint of physicians. The annual liturgy is named for the color traditionally worn by health care workers.

Dr. Louis C. Breschi, president of the national Catholic Medical Association, told The Catholic Review he is “cautious” about whether health care reform will exclude abortion coverage and protect conscience rights. Several amendments to do just that have been defeated in Congress, he said.

“I’m not optimistic,” Dr. Breschi said. “It does not bode well for the outcome of the legislation.”

Dr. Breschi said he was troubled by what he considers to be a lack of lawmaker interest in the personal relationship of doctors to their patients.

“There’s too much emphasis on government support of health care and less on the individual and the family,” he said.

Dr. Marie Boursiquot, president of the Catholic Medical Association-Baltimore Guild, was also troubled by the lack of explicit protections for life in the current health care proposals.

“There’s the potential for the assault on life in the form of supporting abortion and end-of-life issues,” she said. “It’s important for us to take a stand that aligns with our faith and our church. We are called as Christians to witness to our faith.”