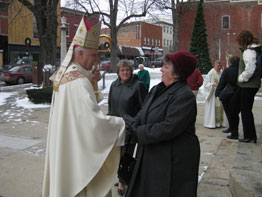 Acknowledging the pain that comes with the impending closure of St. Michael School in Frostburg, Archbishop Edwin F. O’Brien visited St. Michael parish Dec. 8 and encouraged the faith community to work toward healing.

“Change is painful – very painful,” said Archbishop O’Brien, speaking during a morning Mass that attracted about 250 for the Feast of the Immaculate Conception.

“I ask for your understanding and your prayers,” he said. “Sometimes pain can lead to anger. I depend on you to look to healing and to remember that Catholic sense of one for the other.”

Archbishop O’Brien’s Frostburg visit was part of a four-day tour of the westernmost reaches of the archdiocese. He celebrated Masses at St. Mary in Cumberland on Dec. 5, St. Peter in Westernport on Dec. 6 and St. Peter the Apostle in Oakland on Dec. 7.

The archbishop’s visit to “Mountain Maryland” means a lot to the people of the region, according to Father James Kurtz, pastor of Ss. Peter and Paul in Cumberland. As soon as he was installed as Baltimore’s 15th spiritual shepherd more than a year ago, the archbishop made his first pastoral visits to the parishes of the west. His return is a great encouragement, the Capuchin Franciscan priest said.

“It helps our people feel like they’re a part of the Archdiocese of Baltimore,” Father Kurtz said.

During the Mass at St. Michael, the archbishop said Catholic education faces enormous challenges with increased expenses and declining enrollment. Changes are needed, he said, to help ensure long-term viability.

“It’s not today what it was yesterday,” said Archbishop O’Brien, who blessed the parish’s renovated hall following the liturgy, “but it still can be strong.”

Father James Hannon, pastor of St. Michael and six other Western Maryland parishes, announced the school closure in late November, citing a steady decline in enrollment, a widening affordability gap and the inability of the parish to provide sufficient support.

Allegany County has suffered declining population, and while St. Michael School saw a slight enrollment increase this year, there are currently only 88 children enrolled in the pre-K-5 school.

Father Hannon and Archbishop O’Brien thanked teachers and parents for the commitment to the 116-year-old school. A team of parents had recently intensified fundraising and local marketing efforts in an attempt to save the school, but it was not enough.

“The sacrifices that have been made have been extraordinary,” Archbishop O’Brien said.

Kathryn Black, St. Michael’s principal, said faculty members had a very frank meeting with the archbishop prior to the Mass to discuss their feelings about the closure.

“He asked us to do all we can to provide the very best education for the children through the end of the school year,” Ms. Black said. “That’s what we’ve always done and that’s what we will continue to do.”

The principal, who opposed closing the school, praised her teachers for devoting their lives to St. Michael. They work for far less salary than is suggested by archdiocesan guidelines, she said, and they provide a loving environment and high academic standards. Test scores have always been solid at St. Michael, she said.

Ms. Black is encouraging children to enroll in Bishop Walsh School in Cumberland, but she believes most families will likely send their children to the local public school.

Moments after greeting the archbishop, Catherine Smith and Libby McMorran fondly remembered the days when they attended St. Michael School in the late 1940s and early 50s. Tuition was free, the sisters said, and there were far more students. It’s sad to say goodbye to the last parish school west of Hagerstown, they said.