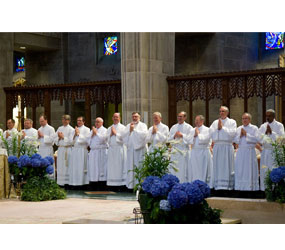 Although more than 1,300 people filled the Cathedral of Mary Our Queen May 14, only the occasional click and whir of a camera could be heard as Archbishop Edwin F. O’Brien solemnly laid his hands on 14 men who knelt in front of him. Silently conferring the Holy Spirit, the archbishop ordained the white-robed figures to the permanent diaconate as the hushed congregation looked on at the “essential act” of ordination.

“It was powerful,” said Deacon William Senft, a cathedral parishioner and one of the newly ordained deacons. “I really felt the Holy Spirit when the archbishop laid his hands on me and my brothers. It was a great blessing.”

The newly ordained men represent the largest class of deacons for the Archdiocese of Baltimore in more than a decade. All married, they hail from as far west as Oakland in Garrett County and they include the president-CEO of a hospital, a scientist, a social worker and a biomedical research manager.

During the tradition-rich liturgy, Deacon James Westwater called the candidates forward from the congregation. One by one, the men rose and declared that they had “come to serve.”

The men placed their hands in those of Archbishop O’Brien, promising respect and obedience to the archbishop and his successors. In an expression of their total dependence on God, they prostrated themselves on the floor as the entire congregation chanted the Litany of the Saints.

“Pray for us,” the candidates solemnly intoned at each saint’s invocation.

After the archbishop laid hands on each new deacon, the men were vested with the stole and dalmatic – liturgical garb that symbolized their office. The archbishop presented each deacon with a Book of the Gospels. He extended the kiss of peace, an action repeated by other deacons.

In his homily, Archbishop O’Brien noted that “diakonos” – the word for deacon – is connected with service.

“As those first seven deacons were ordained to serve the mundane needs of the community by waiting on tables,” he said, “so each of you will look for every opportunity to offer assistance to the material and physical needs of any neighbors in need, particularly those who are overlooked, without power or otherwise on the margins of our society.”

The archbishop reminded the men that they serve not in their own names or by their own authority, “but on behalf of the church and the name of Christ who, through you, still comes to serve and not to be served.”

The deacons will proclaim the Gospel, deliver homilies, administer the sacrament of baptism and witness marriages. They have other liturgical duties and are active in service at parishes, hospitals, prisons and other ministries.

Holding his 1-year-old daughter, Gabriella, in his arms after his ordination, a smiling Deacon Heathcott called the ordination a “grace-filled day.”

Jill, the new deacon’s wife, said she believes her husband’s experience as a family man will aid his ministry. The Heathcotts have five children.

“I think he’ll bring the family aspect with him,” she said. “We have a large family and he can relate well with parents and new parents.”

Deacon Currens acknowledged that preparation for the diaconate was sometimes grueling. The deacons completed a one-year aspirancy program and three years of human, spiritual, intellectual and pastoral formation. As part of their formation, they served one year at a parish and one year in an institutional setting such as a hospital or prison.

“They are all so different and all are very accomplished in their fields,” said Deacon Currens, a scientist-administrator at the National Institutes of Health, “but that really didn’t come into play. What came into play was their faith, and everyone had a really strong faith.”

Deacon Jennings said the most touching part of the liturgy was the Litany of the Saints.

“You could feel all the prayer,” he said.

Deacon Russell added that it was “exhilarating” to finally reach ordination.

“It also feels humbling to hear the archbishop talk about people depending on you and the work that you do in the archdiocese,” said Deacon Russell, whose wife, Mary Ellen, read one of the readings at Mass.

“It’s humbling to think how you will be able to live up to that responsibility,” he said.

At the end of the liturgy, Archbishop O’Brien announced the assignments for the new deacons.

Visit www.catholicreview.org/matysekblog for a video report on the deacon ordination.