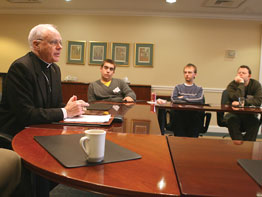 Leading a discernment retreat for 13 young men considering the priesthood in the Archdiocese of Baltimore, Archbishop Edwin F. O’Brien said there is joy to be found in dedicating one’s life to Christ and serving the people of God.

“Joy is there when we realize the Lord is near,” said Archbishop O’Brien, speaking at the opening conference of the two-day retreat, held Jan. 4-5 at St. Mary’s Seminary and University’s Center for Continuing Formation, Roland Park.

“Joy comes when we are so united to the Lord that we act as he did,” he said.

The archbishop highlighted the priestly example of Vietnamese Cardinal Francois Xavier Nguyen Van Thuan, who was arrested in 1974 a few months after being named archbishop of Saigon. Cardinal Thuan spent 13 years in prison, including nine years in solitary confinement. Kept in a dank room that became so hot that he was forced to breathe air through a crack in the wall, the prelate constantly worried about his people. He found joy, Archbishop O’Brien said, when he heard a voice telling him the Lord was with him in his suffering.

“He made a cross out of barbed wire and sang hymns in Latin,” said Archbishop O’Brien, noting that jailers had to be changed frequently because Cardinal Thuan inspired an interest in Christianity.

“The jailers saw this as some kind of miracle,” Archbishop O’Brien said.

“Christ’s hand is always there to bring you up,” he said.

The archbishop said most priests he knows are happy and he pointed to a survey that found 85 percent of priests in the U.S. are happy in their priesthood.

Chad Burns, a 21-year-old parishioner of St. Clement I in Lansdowne, said it was “exciting” to meet Archbishop O’Brien. The archbishop celebrated Mass with the participants, ate dinner with them, gave several talks and answered questions about the priesthood. Seminarians were also on hand throughout the retreat, and there were opportunities for confession, eucharistic adoration and prayer.

“I see a lot of quality guys here,” said Mr. Burns, a student at the University of Maryland, College Park.

Mr. Burns said he is considering the priesthood because he admires his parish priests and wants to be like them.

Ryan McCubbin, a 20-year-old parishioner of Our Lady Queen of Peace in Middle River, said he first started thinking about the priesthood when he was 15. Quoting a point made in one of Archbishop O’Brien’s talks that “officers eat last,” Mr. McCubbin said he believed the priesthood is all about service.

“It’s got to be a priority,” he said. “The more we talk about it, the more it’s going to be brought to people’s attention.”

The archbishop said he is asking all parishes in the archdiocese to include a prayer for religious vocations in the general intercessions at Mass.

“When there’s no mention of vocations in the intercessions, I wonder if we’re really concerned about the lack of vocations,” he said. “If we don’t pray there in the midst of the Mass, I doubt we’ll pray anywhere else with any effectiveness.”

The archbishop said he has personally asked high school students to pray for vocations and to come up with ideas to promote vocations. He’s challenged them to consider the religious life, he said.

Father Gerard Francik, archdiocesan vocation director, said attendance at this year’s retreat was more than double what it was last year – a sign of increasing interest in the religious life.