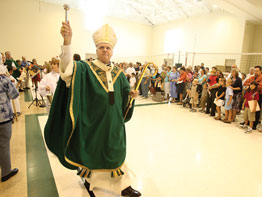 WALKERSVILLE – Archbishop Edwin F. O’Brien lifted a pair of gigantic scissors and playfully gave them a few quick snips in the air before cutting a bright red ribbon that officially marked the opening of a new $2.8 million parish center at St. Timothy in Walkersville Sept. 7.

During a morning Mass earlier in the church, the archbishop said the completion of the parish center will help the 980-family parish live out Gospel values.

“The new building will be an extension of what we do here at Mass,” said Archbishop O’Brien, noting that at the end of every liturgy worshippers are called to go and become the Gospel to others.

The 12,000-square-foot parish center includes a large hall with a basketball/volleyball court, numerous meeting rooms, kitchen space and offices. Designed by Rubeling and Associates and constructed by Bruchey Brothers Builders, the structure includes a large inverted V as part of its exterior design, echoing the nearby church.

“The parish center will give us the chance to use sport and recreation to draw people into the church,” said Father Andrew Aaron, pastor. The priest noted that the center will also benefit the wider community by providing a place for groups like Alcoholics Anonymous.

The dedication of the parish center was almost delayed by an April 9 roof fire while the building was under construction. Firefighters had to cut a 100-square-foot hole in the roof to put out a smoldering fire.

“The builders have been great,” said Father Aaron. “They went into overdrive to get it done on time.”

Linda Morgan, president of the pastoral council, said the new parish center was the fruit of four years of work and would not be possible without the help of “so many dedicated people” who supported it.