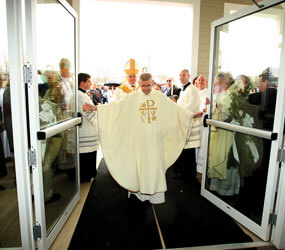 A steady spring rain kept the sunlight from shining through the large, clear windows of their spotless sanctuary, but it failed to dampen a palpable sense of joy among parishioners of St. Ann in Grantsville as Archbishop Edwin F. O’Brien dedicated their new church May 3.

More than 300 parishioners and guests filled the small country church in Garrett County to celebrate the long-awaited arrival of their house of worship. St. Ann’s former church was razed after a Dec. 23, 2006, fire severely damaged the building.

Moments before the liturgy began, Archbishop O’Brien greeted umbrella-toting parishioners who gathered in the parking lot. He accepted the architectural plans, construction documents and the key to the new hilltop church. Father James Hannon, pastor, then pulled open the doors to the building and accompanied the congregation into the $1.8 million building as an inter-parish choir sang “All are Welcome.”

“Lord, send your spirit from heaven to make this church an ever-holy place and this altar a ready table for the sacrifice of Christ,” Archbishop O’Brien said during the prayer of dedication.

During the two-hour liturgy, the archbishop blessed the building with holy water and incense. He deposited the altar stone from the former St. Ann Church and newly acquired relics of St. Clement of Rome into the base of the altar. He anointed the altar with chrism oil, and several of the 15 concelebrating priests also anointed the building’s four walls in 12 places. The priests later lit candles at the same spots where the walls had been anointed.

Father Hannon said the new church is the product of the support and commitment of many parishioners, the archdiocese and the wider community. He recalled how firefighters presented sacramental records to Father Ty Hullinger, former associate pastor, after the fire.

“They were still warm from the fire,” Father Hannon said. “The warmth of the books was a symbol of lives lived in the parish.”

While the new church was under construction, parishioners of the 100-family faith community have been worshipping at the nearby Newman Funeral Home. Lynn Newman, one of the funeral home’s owners, presented the parish with an $18,000 check during the dedication. The money was what St. Ann had paid for using the funeral home for worship. Mr. Newman said his family wanted to make the donation to be supportive of the religious community of the region.

Standing near the sanctuary after the dedication liturgy, Mike Root marveled at the spectacular view of Casselman Valley visible from inside the church. The former church was an almost windowless structure that offered no glimpse of the majestic ridge of mountains or patches of woodlands outside.

“It’s everything you could ever want and more,” Mr. Root said. “The view is incredible. Once it starts to turn green outside, it’s going to be unbelievable.”

DCMM Architect of Gaithersburg and Eads Architects of Cumberland worked on the church’s design. Daystar Builders Inc. of Grantsville was the builder, and design work was completed by Gardiner Hall Interior Design of Chevy Chase.

Mr. Root said parishioners have grown closer after the fire and are elated to be in a beautiful house of worship.

In closing comments, Archbishop O’Brien commended Father Hannon and the St. Ann community for their dedication.

“This building is an image of what happens when people come together,” he said.