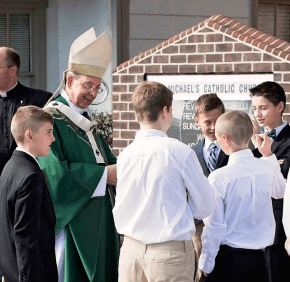 By Greg Larry
Special to the Review
CLEAR SPRING – Archbishop William E. Lori visited this Washington County town Sept. 25 to mark the 150th anniversary of St. Michael Church.
The archbishop stopped in the hamlet west of Hagerstown on a beautiful autumn day to celebrate Mass and offer the sacrament of confirmation to eight young parishioners.
“What a joy to celebrate with all of you the 150th anniversary of St. Michael Parish here in Clear Spring and, at the same time, to confirm young people from the parish,” Archbishop Lori said in his homily. “In a sense, we are celebrating all at once the past, present and future of this community.”
“It was really nice to have the archbishop here,” said Mark Boyer, a corporator for St. Michael, a mission of St. Mary in Hagerstown. “Everyone was excited. … We had 97 people today. We were full. We are the smallest parish in the archdiocese (of Baltimore), I believe.”
“There was a lot of excitement and anticipation this week,” said Penny Abe, CCD coordinator. “I loved the archbishop’s homily and how he looked at the history of the church.”

Construction on St. Michael began in 1866 and was completed a year later.
“The history of St. Michael’s begins just as the Civil War concludes,” Archbishop Lori said. “War, of course, never simply concludes but leaves behind many scars and much grief. Many families in this area had lost their sons in the conflict and now with great faith and fervor came together in a little brick structure to form what would be St. Michael’s Parish.
“On July 15, 1866, while Martin John Spalding was Archbishop of Baltimore, the cornerstone for a new church was laid and families were charter members of the new parish generously set about completing the new structure.”
Archbishop Lori gave thanks for the service of Father Ernest Cibelli, the administrator of St. Mary and St. Michael; Father Lawrence Adamczyk, the associate pastor of the two churches; and Father Collin Poston, their previous pastor.
The archbishop also made special note of another longtime pastor.
“Let me mention Monsignor Alfred E. Smith who celebrated his 40th anniversary of priestly ordination among you in 1996,” the archbishop said. “As you know, he has just celebrated his 60th anniversary of ordination, so we take this occasion to thank him and to send him our love and gratitude.”
Diane Fridinger, another corporator, appreciated the mention of Monsignor Smith.
“Everyone worked very hard to get ready,” she said. “It all went beautifully. It was like he (Archbishop Lori) was talking to us.”
“We are very grateful to His Excellency for taking the time to come out here,” Father Cibelli said. “We know how big the archdiocese is and we are gratefulfor the way he shepherds us, no matter where we are in the archdiocese. It helps to know where we are going if we know where we came from.”
Earlier in the month, St. Michael’s beloved organist, Peggy Mellott, passed away. Jane Cohill, 80, who grew up in the parish, stepped in as her replacement.

“We are all going to miss Peggy,” said Cohill, who was among those pleased to see Archbishop Lori. “I thought he (Archbishop Lori) was very down to earth. I felt very comfortable listening to him.”
The Daughters of Charity who serve St. Mary in Hagerstown helped serve a meal to the congregation following the service.
Archbishop Lori had special words for the young people being confirmed.
“Confirmation,” he said, “is not the end of your faith formation, nor should it be the sacrament of good-bye,’ to quote Pope Francis. Confirmation means you and your families are committed to professing your faith, to worshipping each Sunday at Mass, to receiving the sacrament of reconciliation regularly and to leading a life of charity and service for others.”
“The world all around us,” he continued, “would like you to be like the rich man in the Gospel who was only worried about his own comfort and convenience. It seems to tell us that happiness lies in owning the latest iPhone or Android. We don’t have to be really rich to get stuck on ourselves and on our possessions. It can happen to anyone, and when it does we have no room in our hearts for God or for other people, especially those in need.”
Those receiving the sacrament of confirmation were Wyatt Abe, Christopher Alvarez Jr., Clayton Boyer, James Engle, Patrick Kinman, Julie Mills, Sara Mills and Jack Weber.
“We had a lot of excitement and anticipation and the kids were a little nervous,” said Abe, the CCD coordinator. “It was a sacrament to show their growth and their willingness to be warriors for Christ. It’s a big day.”
See also:
Thriving Harford parish marks 225th anniversary in 18th-century style
Filipino community celebrates saints, faith and culture
PrevNext