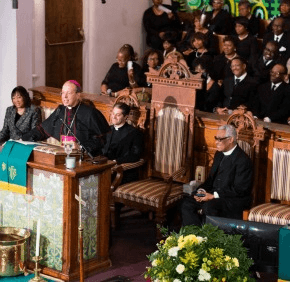 “Today in worship, it is not the Roman Catholic Church and the A.M.E. Church that have come together, but the church universal, the holy catholic church, has come together today, to let Baltimore know that it’s going to take all of us who love Jesus to turn our city,” Rev. Reid said.

Archbishop Lori noted that the Archdiocese of Baltimore has long enjoyed ties with Bethel A.M.E., located at 1300 Druid Hill Ave., including a close friendship between Cardinal William H. Keeler, archbishop emeritus of Baltimore, and Rev. Reid.

In recent years, “Bishop Denis Madden (auxiliary bishop of Baltimore) has joined with your pastor and with many of you in working on projects for the betterment of our beloved city,” the archbishop added.

He conceded that there are differences between the Catholic Church and the A.M.E. Church.

“Now, in the interest of full disclosure, I must confess that preparing for today’s sermon was a little more challenging than when I prepare for a typical Sunday sermon at a Catholic church,” he said, earning laughter from the congregation. “Let me tell you why. You know, those Catholics, they like short sermons.”

The archbishop told the Catholic Review he had met Rev. Reid at his installation, and has been serving with him on the board of directors of the Greater Baltimore Committee, but when they had lunch together in the spring, soon after the unrest following the death of Freddie Gray Jr., the two really began to identify a shared vision.

Rev. Reid told his congregation that he and the archbishop “broke bread, at his wonderful house, and he shared with me his book, his heart, and we have agreed to work together for the betterment of the city.”

“Our churches share a common love for the truth,” he said, adding that truth “helps us see that every person is made in God’s image … therefore every person is deserving of respect and protection and a decent life.”

The archbishop invoked Pope Francis, warning that the developing “throwaway culture” threatens to treat human beings as “disposable goods.” He called on the congregation to reject “an economy of exclusion.”

“We’re here to create an economy of inclusion, an economy of equality, and an economy that respects human rights and the dignity of all,” Archbishop Lori said.

He tied his remarks to initiatives that will surface during the upcoming 2016 session of the Maryland General Assembly, including a push for assisted suicide “championed by a group that once called itself the Hemlock Society.”

The archbishop said that the proposed bill would neither include depression screening for those who elect to end their lives nor the presence of a physician when lethal medication is consumed. A terminal diagnosis, the archbishop added, does not have to mean the end of worthwhile living.

Making his point, he cited Monsignor Arthur F. Valenzano, 24th rector of the Basilica of the National Shrine of the Assumption of the Blessed Virgin Mary in Baltimore, who died Sept. 5 after a battle with leukemia that lasted much longer than doctors expected.

“He beat the odds,” said Archbishop Lori, adding that Monsignor Valenzano managed to touch “a great number of people” and “bring them to Christ” in the years that surpassed what doctors had allotted him.

The archbishop also spoke about education, observing that “you and I want the best for our children.”

“Education is the clearest path for accomplishing those goals,” he said, touting the archdiocese’s community schools –
Archbishop Borders School, Cardinal Shehan School, Holy Angels Catholic School and Ss. James and John School – which “educate children of all faiths and from every neighborhood in this city.”

He spoke up for the Maryland Tax Credit, a bill that would allow businesses to receive tax credits in exchange for supporting students of both public and private schools.

“Mostly, it’s going to help students and their families by driving down the cost of education,” Archbishop Lori said.

He acknowledged that transformation is impossible without trust, gained by engagement within the community, such as Bethel A.M.E.’s ministry to gang members.

“We are called to conquer evil with good and hatred with love,” the archbishop said. “That is the way God rebuilds societies.”

Finally, Archbishop Lori noted that Pope Francis had, during his visit to the U.S., had “invoked the image and words” of Rev. Dr. Martin Luther King Jr.

“Fifty years after Selma, far too many members of the African-American community, in our city and in our nation, struggle to attain Dr. Martin Luther King’s dream,” the archbishop said.

“We can’t call ourselves a nation of freedom as long as there is one person for whom freedom remains out of reach,” he added, a statement that was interrupted by applause.

“See, they never applaud me in the Catholic Church,” the archbishop quipped, to more laughter, “so I don’t know when to stop for your applause.”

One of those who applauded was Carla Henry Hopkins, a 44-year parishioner of Bethel A.M.E.

Reflecting on the archbishop’s discussion of inadequate education as well as assisted suicide, Hopkins said that the Bethel A.M.E. community, too, is “challenged to think about some of those questions where our faith, our humanity and our belief systems intersect.”

Members, she added, are encouraged to “not succumb to a ‘worldview’ way of thinking, but to take, as my pastor says, a ‘Word-view’ of things.”

“It reminded us all that we all have the same message to be heard,” he said. “Dr. Reid is the messenger, who gets the message from God, and, from what I just heard, the archbishop got the word from God and gave it to us, too.”

“I had an opportunity to hear someone I probably never would have heard,” Hopkins added. “I liked the diverse way he brought the message.”