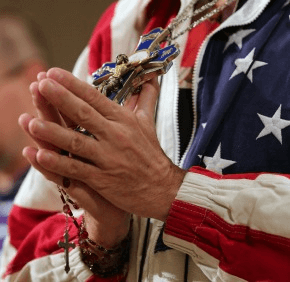 The upcoming Fortnight for Freedom gives people of all denominations the chance to pray for religious freedom, to study it and to act to create a just and peaceful society.

Baltimore Archbishop William E. Lori, who chairs the U.S. bishops’ Ad Hoc Committee on Religious Liberty, noted that when it comes to religious freedom, “like any blessing God has given, if we want to preserve it and use it well, we have to pray about it.”

Study is necessary because “there is so much we all have to learn about our American heritage, about our experiment in limited government and about what the church teaches with regard to religious freedom,” the archbishop said.

He added that increasing threats and challenges to religious liberty must be addressed with action, primarily by “prayerful, well-informed, committed citizens, who are mostly lay people doing what Catholic social teaching says Catholic lay people should be doing, and that’s being on the front line helping to create a just and peaceful society.

“And you do not have a just and peaceful society when religious freedom is impaired,” Archbishop Lori said.

The fourth annual Fortnight for Freedom, a two-week period leading up to the July 4 celebration of Independence Day, is marked by special Masses and other activities. This year’s theme is “Freedom to Bear Witness” to the truth of the Gospel.

The fortnight celebrations this year coincide with the 50th anniversary of the Second Vatican Council document “Dignitatis Humanae,” the Declaration on Religious Liberty. The archbishop said the declaration speaks of religious liberty “not simply as freedom from government coercion, but also for what we might call freedom for excellence, the freedom to become the persons God meant us to be. …”

It is important to not allow religious freedom to be redefined only to mean freedom of worship, he said, with the government decreeing that religious freedom is limited to within the four walls of a church. Our country has never stood for the current contention by some that once a church is reaching out to educate, provide charity services and serve the common good it must play by government rules, he noted.

The church views this through the lens of the Gospel, expressing faithful citizens’ relationship with the Lord by seeing him “in the poor, the needy, the marginalized, young people growing up, etc.,” Archbishop Lori said. “We are doing this not as a kind of a ‘churchy’ sideline. We are doing this as an outgrowth of what we believe and how we worship.”

He said the church plays an important role in the public square and serving the common good, citing as an example the work the church is doing in the aftermath of recent unrest in Baltimore. “If ever there was a moment that demonstrated the role of the religious community as a bringer of peace and as a provider of services, that was it. And there are a lot of people who would like to see it go away,” the archbishop said. “I can’t imagine what they’re thinking.”

Despite low Catholic marriage numbers, some see trend turning around