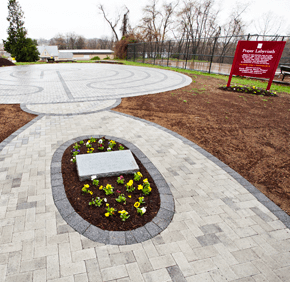 By Elizabeth Lowe
elowe@CatholicReview.org
Twitter: @ReviewLowe
Baltimore Archbishop William E. Lori celebrated a Mass and dedicated a new prayer labyrinth at St. Joseph School in Fullerton April 12.
Nearly 500 students, teachers and community members attended the event.
The school’s Student Retreat Committee, comprised of a dozen faculty members, spearheaded the labyrinth project.
“It’s a beautiful prayer garden,” said Brenda Albright, a committee member and St. Joseph pre-k teacher for 4-year-olds. “I hope it’s used often for reflective prayer and the children ask to go outside.”
A large inscribed stone at the labyrinth’s entrance is in memory of Xavia Pirozzi, a former St. Joseph student and sophomore at The John Carroll School in Bel Air, who died in March 2012 from lymphoma. The Fallston resident was 15.
Pirozzi, who had a successful heart transplant in 2007 at age 10, was diagnosed with lymphoma in June 2011. She had been at The Children’s Hospital of Philadelphia since November 2011. She ended chemotherapy treatments and went home for hospice care days before she died.
Xavia’s four siblings attend St. Joseph School. Adria, Darius and Ianna are triplets and in the eighth grade and Alita is a third-grader. The Pirozzi family worships at St. Joseph Parish.
“It’s a beautiful tribute,” Albright said.
All instructors can use the labyrinth and each grade will spend time praying on the pathways, Albright said. Even math teachers can find ways to use the space for lessons.
Second-graders will meditate on the Eucharist and students in grades four through eight will, at their own grade level, reflect on their faith journey and relationship with Jesus, Albright said.
“The children love the path,” Albright said. “I’ve taken the 4-year-olds out and it’s awesome. I hope it brings them a prayerful experience.”
At its center, the labyrinth has space for 15-20 students.
The project cost nearly $30,000 and was funded through donations, Albright said. Construction began around the new year and was completed days before the dedication.
Monsignor Kevin T. Schenning, pastor of St. Joseph, was instrumental in getting the labyrinth built, Albright said.
“He wants to instill prayer in the children,” Albright said.
The St. Joseph Parish community is encouraged to use the labyrinth.
Also see:
John Carroll friends and classmates honor student on first anniversary of her death
John Carroll student remembered as ‘saintly’
Xavia’s heart
Copyright (c) April 12, 2013 CatholicReview.org
PrevNext