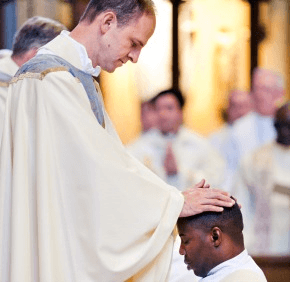 Reverend Michael DeAscanis from director of Vocations and temporary administrator of St. Philip Neri in Linthicum, to pastor of St. Philip Neri Parish.  Effective Feb. 1.
A native of New Castle, Del., Father Michael A. DeAscanis was ordained in 2004 after preparing for the priesthood at Mount St. Mary’s Seminary in Emmitsburg and the Pontifical North American College in Rome. After ordination, he continued his studies in Rome for a year.
Father DeAscanis served as associate pastor of St. Ursula, Parkville, from 2005 to 2008; associate pastor of Church of the Crucifixion and Church of the Good Shepherd in Glen Bernie from 2008 to 2010; pastor of St. Agnes in Catonsville and St. William of York in Baltimore from 2010 to 2012 and archdiocesan vocations director from 2012 to 2014. Father DeAscanis, who turns 44 on Feb,. 14, begins his new role Feb. 1.

Reverend Monsignor Richard B.Hilgartner Jr. from administrator of St. Joseph, Hagerstown,  to pastor of St. Joseph Parish, Cockeysville. Effective Jan. 12.
A product of St. Mary’s Seminary and University in Roland Park, Monsignor Richard B. Hilgartner Jr. was ordained in 1995. The 46-year-old Baltimore native served as associate pastor of St. John the Evangelist in Severna Park from 1995 to 1999 and associate pastor of the Cathedral of Mary Our Queen in Homeland from 1999 to 2003.
After studying in Rome at the Pontifical Athenaeum Sant’Anselmo, Monsignor Hilgartner earned a licentiate in sacred theology, later acquiring a specialization in sacramental theology. He was the chaplain and director of campus ministry at Mount St. Mary’s University in Emmitsburg from 2005 to 2007.
Monsignor Hilgartner served at the U.S. Conference of Catholic Bishops in Washington, D.C., as the associate director of the Secretariat of Divine Worship in 2007, advancing to the role of executive director in 2011.
In 2014, Monsignor Hilgartner returned to the Archdiocese of Baltimore as temporary administrator of St. Joseph in Hagerstown.
Reverend Michael Triplett from associate pastor of Our Lady of Mount Carmel to administrator of Our Lady of Grace, Parkton.  Effective Jan. 16.

Reverend James Sorra from pastor of St. Michael the Archangel, Overlea, to director of Vocations.  Effective Feb. 1.
Born in the Philippines, Father James L. Sorra prepared for the priesthood at St. Mary’s Seminary in Roland Park. He was ordained in 2006.
The 46-year-old priest served as associate pastor of St. Louis in Clarksville from 2006 to 2009. He was appointed administrator of St. Michael the Archangel in Overlea in 2009, becoming pastor in 2012. He begins his new role as archdiocesan vocations director Feb. 1.
Reverend Samuel Young from pastor of Our Lady of Grace, Parkton, to sabbatical.  Effective Jan. 6.
Also see:
Clergy assignments for September 2014
Clergy assignments for July 2014
Clergy assignments for June 2014
PrevNext