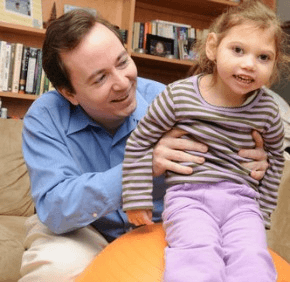 By Tony Rossi
When Sarah Jane Donohue came into the world on June 5, 2005, she was a happy, healthy newborn. Five days later, she had two broken collarbones, four broken ribs, and a traumatic brain injury that destroyed 60 percent of the rear cortex of her brain. Why? Because she was shaken violently by the baby nurse that her parents had hired to help care for her.
Doctors told Sarah Jane’s father Patrick that she would never be able to do much of anything, not even walk or talk. But Patrick wouldn’t accept that prognosis as the final word. Though he worked as a lawyer, he started reading whatever he could about the human brain and soon learned how little medical science actually knows about it. Part of the reason for that has to do with funding. Despite the fact that 80,000 American youth are hospitalized each year with brain injuries—and 11,000 of those young people die—the federal government only spends $10 million annually on research for effective treatment.
To remedy this situation, Patrick created the Sarah Jane Brain Project. During an interview on “Christopher Closeup,” he said, “The idea was to establish this National Pediatric Acquired Brain Injury plan, the PABI Plan, which develops a seamless, standardized, evidence-based system of care that’s universally accessible for millions of American families.” Doctors and scientists from all over the world came on board and established a PABI plan that Patrick is now trying to implement through political channels.
In the meantime, he saw the need for kids like Sarah Jane to get an education in an environment uniquely suited for them. With the help of experts in the field of brain injury treatment and rehabilitation, he helped launch the International Academy of Hope—or iHope. It’s “the first and only school for kids with brain injuries and brain-based disorders here in New York City. The response that we’re getting with these kids is incredible. We have one girl, Hannah, who’s 14. When she started in September 2013, she could barely stand and she was nonverbal. She’s now walking around the school. And three months ago, she said to her mother for the first time, ‘I love you.’” Sarah Jane hasn’t come that far, but she is also making progress.
With all his work, Patrick’s number one priority remains his daughter—and it has been since a moment in the hospital back in 2005. He said, “She was less than two weeks old, and they were trying to get an IV into her. Her mouth was wide open, she had tears coming down her face, but she couldn’t [vocally] cry because of the brain injury. I’ll never forget looking at her and saying, ‘It’s my job to be the voice for her.’”
Patrick’s Catholic faith has enabled him to continue moving forward with a positive attitude, and he notes that he sees divine intervention in daily activities with Sarah Jane. He doesn’t spend time questioning why this happened to her, but instead takes a cue from the Serenity Prayer by focusing on the things he can change.
Where does Patrick hope to be five years from now? “My job is to change the world for Sarah Jane and the millions of kids like her. So five years from now, we better be a good way into implementing the PABI Plan. Our intentions are to develop an iHope in Boston, Chicago, Los Angeles, Dallas, Mumbai, Shanghai…My philosophy is pretty simple: things work out best for those who make the best of the way things work out.”
For more on the Sarah Jane Brain Project, click here.
Tony Rossi is director of communications for the Christophers. Contact them: The Christophers, 5 Hanover Square, New York, NY 10004; or email: mail@christophers.org