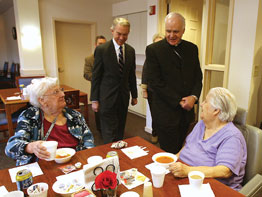 The spritely 69-year-old parishioner of Our Lady of the Fields, Millersville, told the archbishop how much she has enjoyed residing at the Catholic Charities’ facility for the past two years and proudly showed him the pray station in her living quarters.

“It really is a beautiful facility,” she said. “I couldn’t be happier here.”

The archbishop’s two-day tour of Catholic Charities’ facilities was the third time the prelate has visited the organization’s programs. The tour began with Friendship Station and Sarah’s House for homeless families in Fort Meade; it concluded Feb. 21 with visits to the Jenkins Campus for senior care in southwest Baltimore and St. Jerome’s Head Start in Pigtown, which provides early development and intervention services for children from low-income households and their families.

Archbishop O’Brien continues to applaud the work of each program he examines.

“You can see the wonderful work being done by the staff and volunteers in these programs for people who really need these services,” he said. “I’m impressed with each one I’ve seen.”

Catholic Charities runs some 80 programs and cares for more than 160,000 Marylanders throughout the Archdiocese of Baltimore, including the homeless and hungry, the elderly and children who are emotionally disturbed.

During the Sarah’s House visit, Archbishop O’Brien marveled at the collaborative effort of Catholic Charities, the United States Army and Anne Arundel County Department of Social Services to provide shelter for the homeless and training to help them become self-sufficient.

“What’s unique about our program is in the length of stay,” said Bruce Clopein, manager for development and volunteer resources at Sarah’s House. “Some can stay up to two years. It gives folks a chance to get settled, save money and be prepared to be on their own. It’s a way to really effect change.”

In the five months since being installed in Baltimore, Archbishop O’Brien has embarked on an extensive tour of the parishes, schools and philanthropic programs in Baltimore City and nine Maryland counties.

“It’s important that I get out, see these places and meet the people,” Archbishop O’Brien said on one of the Catholic Charities’ tours. “There’s a lot still left to see and I obviously haven’t been able to get too in-depth at this stage, but I’m very impressed with what I’ve seen so far.”

He usually builds in two days each week to tour different portions of the archdiocese.

“I don’t find this schedule to be daunting,” Archbishop O’Brien said. “Traveling to these locations is an important part of the job. It’s a part of the job I enjoy, really.”