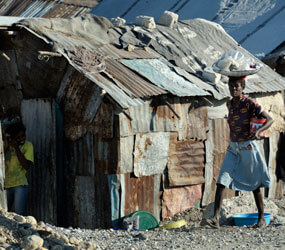 WASHINGTON – Frustration and aggravation are simmering across Haiti a year after a terrifying earthquake ripped apart the country’s most densely populated region and as a persistent cholera epidemic endangers the health of virtually everyone in the impoverished nation.

Life in a tattered tent in a crowded makeshift camp with no alternative on the horizon, threats to personal safety and the need to scramble for food and clean water are fueling the growing anger, said Archbishop Louis Kebreau of Cap-Haitien, president of the Haitian bishops’ conference.

“The people of Haiti are tired of misery,” Archbishop Kebreau said in a Jan. 4 interview with Catholic News Service during a visit to the Washington headquarters of the U.S. Conference of Catholic Bishops. “They are tired of living in their tents. The people are saying they are not happy. They’re frustrated and angry. That provokes violence.”

More than 1 million people continue to live in hundreds of settlements that sprouted after the 35-second magnitude 7 earthquake. At least 230,000 people were killed.

He expressed concern that the surge of hopefulness felt by Haitians at the world’s compassionate response immediately after the Jan. 12 quake has given way to a feeling of abandonment. People don’t think their pleas are being heard any longer, he said.

Citing the widespread cholera epidemic that has claimed 3,650 lives since mid-October, Archbishop Kebreau called upon Haitian authorities to openly discuss the source of the disease and acknowledge the concerns of Haitians.

Although tests showed the cholera strain originated in south Asia and was traced to the Artibonite River in central Haiti, authorities have declined to link the outbreak to the alleged dumping of human waste from an outpost of U.N. peacekeepers from Nepal located on the waterway.

“Truth and openness,” he added, “would resolve a lot of trouble.”

The archbishop’s unease about the potential for violence stems in part from Haiti’s 207-year history, which has been scarred by strong-armed rule and violent efforts to overthrow that rule. Only recently has the country experienced relative calm and peaceful government transitions.

However, violence flared again in early December. Hundreds of protesters blocked streets and set fires in the capital of Port-au-Prince, Cap-Haitien and other communities to express their dissatisfaction with the results of the Nov. 28 presidential election amid charges of fraud.

The country’s Provisional Electoral Council determined that Jude Celestin, a protege of outgoing President Rene Preval, had narrowly finished second among 18 candidates, ahead of popular carnival singer Michel “Sweet Micky” Martelly. Preval, who has maintained a low profile throughout his two terms as president, has been widely criticized for not taking a leading role in earthquake recovery efforts.

Haiti’s new president will be chosen in a runoff between Celestin and former first lady Mirlande Manigat, who topped all candidates in first-round balloting. Originally scheduled for Jan. 16, the runoff has been postponed to allow more time to prepare ballots and polling stations.

While declining to comment on the candidates, Archbishop Kebreau said he feared the election, whenever it occurs, could spark renewed violence if charges of fraud resurface.

Still, there’s more than the election contributing to the restive atmosphere, according to Archbishop Kebreau. In addition to Haitian government officials, the United Nations and even aid agencies often are skewered by Haitians who believe international parties have failed to deliver on promises to rebuild the country, he said.

“Just imagine all the millions that supposedly are arriving (in Haiti),” he said. “Where are they going?”

Archbishop Kebreau urged government, U.N. and aid representatives to begin talking with average Haitians to discover their needs. He also offered the Haitian Catholic Church as a bridge between the parties.

“The problem we have is the church is marginalized,” he said. “They (government officials and aid workers) don’t make contact with us. The church is present and filled with the people and we could give them information. We can help them, but they don’t ask us.

“One gets the impression that they are more interested in making money than taking care of people,” he said.

Archbishop Kebreau, who has rallied the church to meet pastoral needs despite the country’s enormous poverty, is buoyed by the prospect of rebuilding parish infrastructure in the earthquake zone under a newly formed commission. Known in English as the Program for the Reconstruction of the Church in Haiti, or PROCHE, which means “close by” in French, the commission will review and approve parish projects to ensure that building plans meet modern construction codes.

PROCHE primarily will administer an estimated $33 million contributed by American Catholics designated for reconstruction. About 70 parishes were destroyed in the quake.

Crafted in a venture between the USCCB and Catholic Relief Services, PROCHE could serve as a model for all of Haiti, he said.

“It’s a unique opportunity for the church to use this experience to give the world a different perspective (of Haiti),” the archbishop said.

“We must learn from one another,” he added. “We need to learn from everyone without distinction of race or color.”