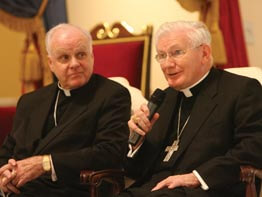 Cardinal William H. Keeler introduced the newly appointed archbishop of Baltimore during a July 12 press conference at the Basilica of the National Shrine of the Assumption of the Blessed Virgin Mary, Baltimore.

Earlier in the morning, the Vatican announced the Archdiocese of Baltimore has its 15th leader as Pope Benedict XVI named military Archbishop Edwin F. O’Brien to replace Cardinal Keeler as the leader of the nation’s original archdiocese.

The news of the appointment comes 15 months after 76-year-old Cardinal Keeler submitted his letter of resignation to the pope, which is required when bishops reach age 75.

Archbishop O’Brien told the crowd at the nation’s first cathedral “it’s going to be hard to measure up” to Cardinal Keeler’s 18-year tenure and will rely on his guidance once he is officially installed Oct. 1.

The cardinal will remain as apostolic administrator of the archdiocese until the October installation ceremony at the Cathedral of Mary Our Queen, Homeland, and hopes to continue his work with the Basilica of the Assumption Historic Trust. Cardinal Keeler was instrumental in completing the $32 million restoration of the basilica.

When asked, Cardinal Keeler said one of the high points of his tenure in the archdiocese has been the “wonderful response of our people to assist with Catholic school education.” He made special note of the Partners in Excellence program which provides assistance to Catholic schools in Baltimore City.

He also said he was encouraged by a growing interest in priestly vocations.

He also has served as an auxiliary bishop of New York, the rector of two separate seminaries and holds a doctorate from Angelicum University in Rome.

“I am humbled in being named shepherd of this historic Premier See whose Catholic roots reach deep into our nation,” Archbishop O’Brien said. “Very much aware of the lengthy and impressive line of my predecessors, I pledge with God’s grace to give myself fully to the task of making Jesus Christ known by preaching his word and serving his people.”

He was in his Washington, D.C., office July 3 when he received a call at 3:35 p.m. informing him the pope was offering him the leadership of the Baltimore See, a position he eagerly accepted.

“It was just a thunderbolt,” Archbishop O’Brien said. “It was completely unexpected.”

As he pondered his new assignment with “mixed emotions,” the archbishop said he was sworn to secrecy until the July 12 announcement.

Cardinal Keeler, who last month underwent brain surgery, said he was thrilled with the pope’s choice for his successor and has enjoyed a good working relationship with Archbishop O’Brien for the past 21 years.

“In every aspect of his priesthood, Archbishop O’Brien has served the church with great courage and devotion,” said Cardinal Keeler, who was appointed archbishop of Baltimore in 1989 by Pope John Paul II and elevated to cardinal in 1994. “I look forward to watching him lead the faithful of this historic archdiocese and seeing the results of his dedicated service.”

Founded in 1789 as the first Catholic diocese in the United States, the Archdiocese of Baltimore is home to more than 500,000 Catholics who worship in 151 parishes in Baltimore City and Allegany, Anne Arundel, Baltimore, Carroll, Frederick, Garrett, Harford, Howard and Washington counties.

Archbishop O’Brien’s first assignment was as a civilian chaplain at the U.S. Military Academy at West Point, N.Y., and was later commissioned as a military chaplain in 1970 and served a tour of duty in Vietnam from 1971 to 1972.
After completing his doctoral dissertation in 1976, he returned to the Archdiocese of New York, served as vice chancellor of the archdiocese and as associate pastor of St. Patrick’s Cathedral, became communications director, served as rector of St. Joseph’s Seminary in Dunwoodie, N.Y., and later as rector of the Pontifical North American College in Rome.

As archbishop of U.S. Military Services he serves more than 1.4 million Catholics, including all U.S. Armed Forces and their families, as well as 170 Veterans Administration hospitals and U.S. Government employees overseas.

Archbishop O’Brien said he would continue to focus his attention on Military Services until his October installation and was eager to begin meeting the priests throughout the Baltimore archdiocese.

He also said he would work closely with Cardinal Keeler and the auxiliary bishops of Baltimore during the transition.

“In the days and weeks ahead, I will offer Archbishop O’Brien some thoughts about this great archdiocese,” Cardinal Keeler said. “I know that he will be able to count on the truly outstanding priests, deacons, religious and laity that have been so supportive of me in my 18 years of service.”