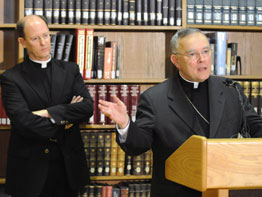 DENVER – Archbishop Charles J. Chaput of Denver is disputing the use of his words on a Web site run by the group Roman Catholics for Sen. Barack Obama ‘08 to justify support for a candidate who supports keeping abortion legal.

In a column published May 19 on the Web site of the Archdiocese of Denver, the archbishop said it is “little more than pious hand-wringing and a convenient excuse” for Catholics to claim “personal opposition” to abortion without taking specific steps to limit or end abortions.

Archbishop Chaput did not directly comment on the presidential candidacy of Sen. Obama of Illinois, the likely Democratic nominee. But he wrote about his own involvement with the presidential campaigns of Democrats Bobby Kennedy, who opposed abortion, and Jimmy Carter, who he said “waffled about restricting it” as a candidate.

“Even as a priest, I justified working for (Carter) because he wasn’t aggressively ‘pro-choice,’“ he said. “True, he held a bad position on a vital issue, but I believed he was right on so many more of the ‘Catholic’ issues than his opponent seemed to be.”

The archbishop said he thought “we could remedy the abortion problem” after Carter was re-elected, but he lost to Ronald Reagan. Even with Reagan, who was “avowedly pro-life,” he said, “the belligerence, dishonesty and inflexibility of the ‘pro-choice’ lobby has stymied almost every effort to protect unborn human life since.”

Roman Catholics for Sen. Obama said on the Web site that the views of the Illinois senator “are most compatible with the Catholic outlook, and we will vote for him because of that – and because of his other outstanding qualities – despite our disagreements with him in specific areas.”

In explaining their stand, Roman Catholics for Sen. Obama cited an earlier column by Archbishop Chaput that “Catholics can vote for pro-choice candidates if they vote for them despite – not because of – their pro-choice views.”

Calling the quote “accurate but incomplete,” the archbishop said he also noted the need for “a compelling proportionate reason to justify” Catholic backing of a candidate who supports abortion.

“What is a ‘proportionate’ reason when it comes to the abortion issue?” he asked in the earlier column. “It’s the kind of reason we will be able to explain, with a clean heart, to the victims of abortion when we meet them face to face in the next life.”

Archbishop Chaput said the reasoning advanced by Roman Catholics for Sen. Obama in their support of a candidate who wants to keep abortion legal “sounds a lot like me 30 years ago.”

“And 30 years later we still have about a million abortions a year,” he added.

“Changing the views of ‘pro-choice’ candidates takes a lot more than verbal gymnastics, good alibis and pious talk about ‘personal opposition’ to killing unborn children,” he said. “I’m sure Roman Catholics for Sen. Obama know that, and I wish them good luck. They’ll need it.”