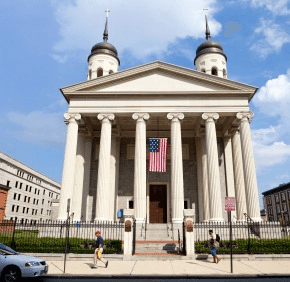 By Christopher Gunty
editor@CatholicReview.org
It sure was not easy being Archbishop of Baltimore in the early 1800s. The archdiocese spanned as far west as the Mississippi River, and even though the dioceses of New York, Boston, Philadelphia and Bardstown (now Louisville, Kentucky) were staffed, Archbishop John Carroll was still responsible for the Diocese of New Orleans, in addition to his own flock in Baltimore, the boundaries of which encompassed many states.
Add to this that the pope (Pius VII) was imprisoned (or a “guest” of Napoleon, depending on your semantics) and communications with Rome were curtailed, and it’s clear that it’s not the same as picking up a phone to call the Vatican nuncio to resolve an issue.
And in 1812, as war reared its ugly head, Archbishop Carroll, a staunch Federalist, was not in favor of the war – at least not until it was formally declared. According to Father Michael Roach, pastor of St. Bartholomew Parish in Manchester and an eminent historian, “(Archbishop) Carroll was terribly pro-British. One of his biographers claimed that his last days ‘were clouded’ by the War with England.”
During that time, the archbishop focused his attention on prayers for peace. In an Aug. 6, 1812, communication to pastors in the diocese, he noted that President James Madison had requested the people of the United States to set aside Aug. 20 “for the purpose of rendering public homage to the Supreme Ruler of the universe, humble adorations of his infinite perfections, and supplications to him for the protecting of peace and prosperity to our common country” (yes, people used to write more formally, in chunks larger than 140 characters at a time).
As detailed in Peter Guilday’s “The Life and Times of Archbishop John Carroll, Archbishop of Baltimore,” the archbishop acknowledged that “we, the members of the Catholic Church, are, at least, equally indebted as our fellow-citizens to the Bestower of every good gift … stand in the same need of his protection, and ought to feel an equal interest in the welfare of these United States during the awful crisis now hanging over them.” He implored the priests to celebrate Mass and engage their people in prayer to God “to shield us in danger, and to restore and return to us the days of peace, a happy peace in this life and above all that peace which the world cannot give.”
Since so many people had come to the colonies for greater freedom to practice religion of their choice, it is no surprise that the folks in these United States would want to join in prayer for peace.
The same holds true these days. Pope Francis asked all Catholics around the world to join in prayers for peace, especially in Syria as the conflict escalated. Bishops and archbishops around the world, including across this country, asked their people to join the effort.
Sometimes when the conflicts are so complex and have so long endured, it seems any solution is distant, if not impossible. As the rockets glare and bombs burst in air, that’s when it seems that the only thing to add to the situation is prayer.
As we mark the Star-Spangled Celebration in Baltimore this week, we would do well to continue to pray for our country and for the world for “a happy peace in this life and above all that peace which the world cannot give.”
Gunty is associate publisher/editor of The Catholic Review.
To read more Amen columns, click here.
PrevNext