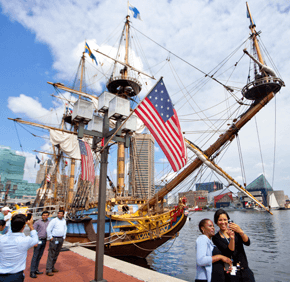 By Catholic Review Staff
Two-hundred years ago, after the U.S. won a crucial victory against British troops at Fort McHenry during the War of 1812, an inspired Francis Scott Key penned what would become the United States national anthem.
In celebration of this event, which took place Sept. 14, 1814, a Star-Spangled Spectacular is taking place in the city of Baltimore though Sept. 16.
More than 6,000 students from across the state of Maryland gathered at Fort McHenry Sept. 9, where they donned red, white or blue ponchos to form a living flag.
Tall ships began sailing into Baltimore’s Inner Harbor Sept. 10 and on Sept. 11, women and men of the Maryland Army National Guard honored the 200th March of the Defenders by marching a 6-mile length of the Star-Spangled Banner National Historic Trail. The Guard members gathered at Baltimore’s Patterson Park, which played a major defensive role in the War of 1812.
The Blue Angels began practicing Sept. 11 for their weekend air show, to the delight of many who live and work in the city. In celebration of the Star-Spangled anniversary and to commemorate the Archdiocese of Baltimore’s 225th anniversary, a large star-spangled banner was hung from the portico of the Basilica of the National Shrine of the Assumption of the Blessed Virgin Mary, which is the nation’s first Catholic cathedral.
Baltimore Auxiliary Bishop Denis J. Madden will celebrate the 11 a.m. Mass Sept. 14 at Our Lady of Good Counsel Parish in Locust Point, not far from Fort McHenry. Parishioners are encouraged to wear red, white and blue. After Mass, they will gather along Fort Avenue to sing the Star-Spangled Banner .
Alan Gephardt, who grew up at St. Luke Parish in Edgemere, and Sonia Socha, a parishioner of St. Vincent de Paul in Baltimore, will impersonate Mr. and Mrs. Francis Scott Key as part of the Star-Spangled Spectacular. To learn the details, click here.
Want to see live camera views of the perspective Francis Scott Key had during the Battle of Baltimore and learn fun facts about the star-spangled banner? Visit keycam.com.
To view a slideshow of the events of the Star-Spangled Spectacular, navigate the arrows below.
See a photo you would like to purchase? Click here.
Visiting Baltimore and interested in attending Mass? See a list of various city parishes.