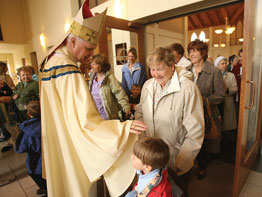 WESTMINSTER – In a year when only one man will be ordained a priest for the Archdiocese of Baltimore, Archbishop Edwin F. O’Brien praised the parishioners of St. John, Westminster, for having three of their own currently enrolled as seminarians for the archdiocese.

There are few parishes that can make that claim, he said, and it’s a sign of the parish’s commitment to fostering vocations to the priesthood, diaconate and religious life.

Archbishop O’Brien celebrated Mass March 27 at St. John as part of his first visit to Carroll County since his Oct. 1 installation. He also visited St. Bartholomew in Manchester, St. Joseph in Taneytown and St. Joseph in Sykesville. He has visited about 130 of the archdiocese’s 151 parishes.

During the liturgy, the archbishop praised St. John’s faith community for its devotion to perpetual adoration of the Blessed Sacrament. Parishioners pray in front of the exposed Eucharist 24 hours a day.

“It’s because of perpetual adoration, because of the good Catholic schooling here, because of your teachers and family and certainly the good people of the parish (that vocations are flourishing at St. John),” said Archbishop O’Brien, pointing out that in decades past an archdiocese of Baltimore’s size would typically ordain 30 or more men to the priesthood every year.

In an interview with The Catholic Review, Archbishop O’Brien said those parishes that have strong devotion to the Eucharist inevitably show good numbers of religious vocations.

“I think we need to stress that over and over again,” said Archbishop O’Brien. “Miracles happen when there’s eucharistic adoration with the intention of vocations in mind.”

Archbishop O’Brien said he was impressed by the parishes throughout Carroll County. He described the area as a growing region with demands for future space needs for parishes and schools.

“But they need priests, and that’s what I’m drumming up as much as I can or the future’s going to be pretty dark unless we have priests to serve our people,” Archbishop O’Brien said. “I think we will get them.”

More than 450 children from St. John school attended the liturgy and hundreds of parishioners also attended – almost filling the massive church. Third graders presented the archbishop with a book they wrote called, “Our Gifts from God.”

“I’ll have some good reading when I fly to Rome,” the archbishop quipped with a smile. He asked the children to pray for vocations and to thank their parents for sending them to Catholic school.

“It reminds us that he is our shepherd and his presence emphasizes the presence of Christ in the community and also connects our local parish to the larger church as the body of Christ,” he said.

Daniel Woo, a 13-year-old St. John altar server, said he was happy to assist at Mass for Archbishop O’Brien. The young eighth-grade homeschooler said he was inspired by the solemn way the archbishop celebrated the liturgy.

“I like that he shows such reverence,” said Daniel. “It shows faithfulness.”

Monsignor Martin Feild, pastor of St. Joseph, Taneytown, called it an “honor” for the archbishop to “come out into the country and be among his people.”

“We’re thrilled that he came to visit us,” he said. “May he come back many, many times.”