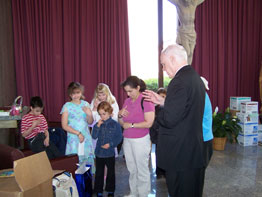 The Hail Mary prayer in German was recited by a group of children from three home-schooled families who visited the Catholic Center in Baltimore for a blessing of care packages they packed for troops in Iraq.

Archbishop O’Brien also listened to them pray The Hail Mary in Latin and sing it in English as the children signed the words simultaneously.

“We told him to tell the pope we love him,” said Mary Hollingshead, coordinator of St. Michael T.O.R.C.H. Home School Chapter in the Archdiocese of Baltimore.

Mrs. Hollingshead and Jeanine Colbourne had coordinated the assembly of 90 plastic bags filled with rosaries, religious cards, chocolate and homemade cards to soldiers. The care packages, along with 300 additional finger rosaries, will be mailed to her friend, Father Tyson Wood, whom Archbishop O’Brien ordained as a deacon.

Several children brought along personal items from home to be blessed by the archbishop as well. Chiara Hollingshead toted along her First Eucharist rosary, missal, and brown scapular in preparation for her upcoming first Communion.

The archbishop asked the children how long it took them to learn the Hail Mary in German, and commented that it was very well done. Bishop Mitchell T. Rozanski, eastern vicar, and Father Adam J. Parker, Archbishop O’Brien’s priest secretary, looked on.

The children answered together, “A long time!”