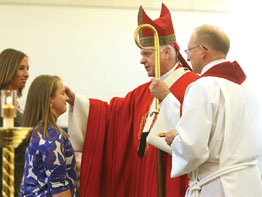 FREDERICK – Archbishop Edwin F. O’Brien encouraged 30 confirmation candidates from St. Katharine Drexel in Frederick to take a stand for their faith during an Oct. 26 Mass.

“You are standing for Jesus Christ,” said Archbishop O’Brien, speaking in front of a large red banner emblazoned with a tongue of fire and a dove symbolic of the descent of the Holy Spirit at Pentecost.

“You are saying he’s made a difference in the world and in your lives,” he said.

The liturgy was a special moment for the growing Frederick County parish. It marked the first confirmation ceremony Archbishop O’Brien has celebrated as archbishop of Baltimore. Later that same day, he confirmed candidates at the Basilica of the National Shrine of the Assumption of the Blessed Virgin Mary in Baltimore.

The sacrament of confirmation is one of the sacraments of initiation administered to those who have been baptized. The church believes that those receiving the sacrament are bound closer to Christ and the church. They also receive special strength from the Holy Spirit to be witnesses of Christ.

Speaking to the Frederick confirmandi, the archbishop said it isn’t easy to embrace the faith.

“Ours is a culture that would rather focus on fitting in with the crowd,” he said. “If you look at the history books, each saint stood for something – often at the cost of their lives. It’s a complete giving of yourself over to Christ.”

After lighting baptismal candles, the confirmation candidates stood and renewed their baptismal promises. The archbishop anointed each of them with chrism oil, tracing the sign of the cross on their foreheads and saying, “Be sealed with the gift of the Holy Spirit.”

Richard Davis, a 15-year-old parishioner of St. Katharine Drexel, called it an honor that his parish was selected as the first for the archbishop to celebrate confirmation.

Richard said he wanted to be confirmed because he “wanted to be a little more involved in the church. He took the confirmation name of St. Martin de Porres, the patron saint of hairdressers and travelers, because his mother is a hairdresser and Richard hopes to travel.

Even though she has nerve damage in her legs, Gail Gaeng, a 15-year-old parishioner of St. Katharine Drexel, also stood before the archbishop, calling it “a little nerve-wracking, but a great blessing.”