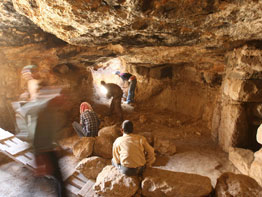 JERUSALEM – Jordanian archaeologists say they have found the world’s first Christian church in the northern city of Rihab, but international scholars question the validity of the claim.

A cave that Jordanians say was used as a church was discovered underneath the already existing St. Georgeous Church, which dates back to between 290 or 300. The size of the cave has not been specified.

St. Georgeous is considered to be among the oldest churches in the world along with one found in 1998 in Aqaba, Jordan, and another found by Israeli archaeologists in 2005 from the first part of the third century in Megiddo, in northern Israel.

The discovery of the church-cave was “amazing,” Abdel-Qader al-Housan, director of the Rihab Center for Archaeological Studies, told The Jordan Times June 9.

“We have evidence to believe this church sheltered the early Christians: the 70 disciples of Jesus Christ,” he said.

A mosaic found in St. Georgeous mentions “the 70 beloved by God and divine.”

The Jordan Times reported that Mr. al-Housan believes early Christians, who had fled persecution in Jerusalem, lived and worshipped in hiding in the cave until Christianity was adopted by the Roman rulers.

Mr. Al-Housan said there were a few steps going down into the cave where they found a circle-shaped area they believe to be the apse, surrounded by several stone seats, possibly for clergy members.

Furthermore, said Mr. al-Housan, they found pottery items dating from the third to the seventh centuries; he said this proved the early Christians and their followers continued to live in the area until the Roman period.

Jordanian officials said they would like to develop tourism to the area, where local tradition holds that Jesus and Mary traveled and some 30 other churches have been found.

However, other scholars have been skeptical, saying that more evidence is needed before dating the cave and establishing it as a place of worship for early Christians.

“I can only judge the findings once I have read the full report, but from what has been published so far I am not convinced that there is any evidence pointing to the fact that the cave was used for Christian worship in the first century or that there is any connection between the later church above and the cave below,” said Israeli archaeologist Boaz Zissu of Bar-Ilan University.

Dr. Zissu, who specializes in Roman-Byzantine archaeology, noted that during the Byzantine time Rihab indeed had an active Christian community, but there were earlier settlements there as well. The cave might have been used as a storage space or cellar for the residents of the earlier periods and might have been turned into a holy site during the Byzantine era, a phenomenon common at the time, he said.

“A few shards of pottery do not prove this was used for worship or used by early Christians … we do know that early Christians were Jews who believed the Messiah had arrived but otherwise behaved very much like their (Jewish) neighbors. (If the claim is true) I would expect to find in the cave dishes and cups of the same type used by Jews who followed Jewish dietary laws,” he said. “A claim like this needs to have indisputable evidence, perhaps some inscriptions.”

Dominican Father Jerome Murphy-O’Connor, a professor of New Testament at the French Biblical and Archaeological School of Jerusalem, said the northern location of the cave meant a connection to the 70 disciples of Jesus would “astound” him “very much.”

He said he personally has doubts about the tradition of Christians fleeing to Pella, Jordan, because if the Christians needed to flee they easily could have escaped to what is today the city of Ramallah, West Bank. In addition, if such a flight had occurred, the Christians would have been more likely to take an established road, which would have led them south, across from the city of Beit Shean in the Jordan Valley, he said.

It also would be important to know in which direction the apse is facing, he said. Early Christian places of worship had east-facing apses, he said, noting that in general the first mention of cave churches began in the Byzantine period when monks wandering in the desert would seek out caves with some sort of apse-like structure facing east.

The presence of the circle of stones is further evidence that the cave would more likely have been used for Christian worship during the Byzantine period, he said, since the early church did not have the tradition of priests surrounding the bishop as the positioning of these stones suggests.

“Pushing the (date) back to the year 70 is very speculative. (The Jordanians) are desperate to create church sites (for tourism),” Father Murphy-O’Connor said. “I would be suspicious of this sort of hype.”