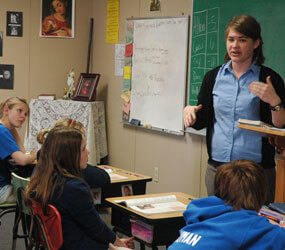 INDIANAPOLIS – At the start of June, Jennifer Prickel was still wondering when God might allow her to follow her call into religious life.

More than $50,000 in student loan debt stood in the way of the 23-year-old Indiana teacher fulfilling her desire to serve God and the church as a member of the Sisters of Reparation to the Most Sacred Heart of Jesus, based in Steubenville, Ohio.

But 10 days after her story appeared in May 28 issue of The Criterion, Indianapolis archdiocesan newspaper, Prickel’s prayers were answered in a dramatic way.

On June 7, a woman called Prickel, a member of St. Anthony Parish in Morris, and told her she felt that she was supposed to pay off her debt. The woman wanted to know the exact amount needed to do that, and asked to meet Prickel later that day.

When Prickel met the woman, who wishes to remain anonymous, she gave the aspiring religious a cashier’s check for approximately $52,000.

Prickel, who was teaching at St. Nicholas School in Ripley County, now expects to enter the Sisters of Reparation as a postulant Aug. 5 – and she couldn’t be happier.

“The overwhelming feeling has just been joy and peace,” she said. “I’ve just been so joyful and just so excited about being able to finally fulfill this desire that I’ve had to live in a religious community, and dedicate my time to God in prayer. I just can’t stop smiling, especially when I tell people.”

There also were a lot of smiles on the faces of the sisters in the community that she will be joining when she shared the news with its superior, Mother M. Wendy McMenamy.

“There was great joy and prayers of gratitude,” Mother Wendy said. “In the midst of a meeting, I received the call and the excitement in Jennifer’s voice was enough to make us equally excited. However, it was above all a deep gratitude that we felt as we saw God’s hand so clearly at work in providing for Jennifer’s needs.”

The Mater Ecclesiae Fund for Vocations, a public charity based in northern Virginia, had awarded Prickel a grant to pay off part of her student loan debt over time.

Corey Huber, who is co-founder and president of the fund that was established in 2007, said that as many as half of all aspirants to religious life had student loan debt at one time and that, for a quarter of them, the level of the debt is high enough to prevent them from easily retiring it so they can enter religious life.

Mother Wendy of the Sisters of Reparation, agreed.

“We have met several young women whose desire to follow the call to religious life has been hampered by loans,” she said. “Some have begun what might be a slow process of working and seeking aid. To all (of) them, we can readily say that God does not issue a call without giving the graces to fulfill that call.”

To date, the Mater Ecclesiae Fund for Vocations has awarded 86 grants. The grant funds are disbursed as monthly payments to pay off loans. But Huber said that, in the past year, he has had to turn down many applicants because of a lack of financial resources in the fund.

Prickel, a 2009 graduate of Franciscan University of Steubenville, said she had been waiting for God to answer her prayers over the past academic year as she worked as a religion and English teacher at St. Nicholas – the same school that she attended from kindergarten through the eighth grade.

Up until June 7, she expected to be teaching there again starting in August.

“I was gearing myself up to teach for another year,” Prickel said. “I would have done whatever God had wanted me to do.”

Judy Luhring, St. Nicholas’ principal, taught Prickel when she was in the third grade and has mixed feelings about losing such a good educator.

“It is very bittersweet that Jennifer will be leaving St. Nicholas School (because) she is a spirit-filled teacher full of love for God and her students,” Luhring said. “It is sad to see her leave but, deep in all our hearts, we are extremely happy for her.”

The sudden and dramatic answering of her prayers just confirmed for Prickel the importance of having complete trust in God.

“We always have to believe that our prayers are going to produce results. Otherwise, it would be useless to pray,” she said. “But I think that the Lord really taught me that when we have full confidence in him, … he can move mountains for us. He delights in our confidence in him.”

For more information about the Mater Ecclesiae Fund for Vocations, go to http://fundforvocations.org. To donate, send a check to MEFV, P.O. Box 7433, Falls Church, VA 22040.