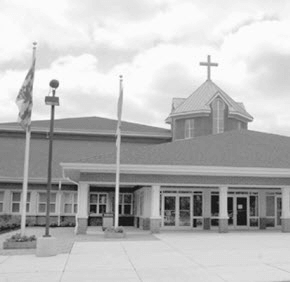 By Paul McMullen
pmcmullen@CatholicReview.org
Twitter @ ReviewMcMullen
The Church of the Holy Apostles in Gambrills, which since its formation as a parish in 2004 has held Mass in the multipurpose space at School of the Incarnation, will merge with St. Joseph, Odenton, in 2014.
The leadership of Holy Apostles unanimously agreed last month to take that step, concluding that the Anne Arundel County parish did not have the resources required to build its own church.
Father William L. Viola, pastor of St. Joseph, announced his retirement as pastor to his parish on the weekend of Nov. 2-3. “I leave treasuring the ministry I have shared with you as pastor,” said Father Viola, who will continue to serve in the archdiocese as a senior priest.
Effective Feb. 1, Father James P. Kiesel, pastor of Holy Apostles, will become pastor of both parishes and lead the integration of the two faith communities into one, ideally by July 1.
“Holy Apostles never reached the critical mass necessary to build its own church,” said Dr. Thomas E. Little, pastoral associate to Seton Vicar Bishop Mitchell T. Rozanski. “The parish was situated where it was because of the anticipated influx from BRAC (the federal Base Realignment and Closure Commission), which never materialized, at least not to the dimensions anticipated.”
According to Little, a new church would have cost between $5 million and $7 million. That was beyond the reach of Holy Apostles, which numbers approximately 450 families. St. Joseph has approximately 600 families.
“We’ve been going through a yearlong discernment process, and this fall it became apparent we didn’t have the wherewithal to build,” said Pat Robuck, a lay corporator at Holy Apostles.
Robuck and her husband of 43 years, Richard, joined Holy Apostles, which was established as a mission in 1999, about 10 years ago. Previously, they worshiped at St. Joseph, and their perspective includes the building of its church.
“When I first started going to St. Joseph, we worshiped in a World War II-era building donated by Fort Meade,” Robuck said. “We asked for pledges, bought bonds and solicited donations until we had enough money to build a church and a hall. It’s a huge undertaking and people need to make huge sacrifices.”
A 17-person leadership group at Holy Apostles that included the parish council, Father Kiesel and Robuck unanimously agreed in mid-October to merge with St. Joseph, an action which has the endorsement of the Archdiocese of Baltimore.
“I would not want to saddle a community with such a debt that it would have had an impact on their ministries,” Bishop Rozanski said of the construction costs Holy Apostles considered. “It is a wonderful community, but we have to address their situation and come to a resolution.
School of the Incarnation has nearly 800 students, and usage of its auditorium/gymnasium for liturgies was problematic.
“I remember one Holy Apostles funeral at School of the Incarnation, and that was over a Christmas break,” Robuck said. “We need a place where people can get married, where we could bury people.”
Little said that in weighing another parish with which to partner, Holy Apostles considered Our Lady of the Fields in Millersville and St. Elizabeth Ann Seton in Crofton, but chose St. Joseph, where the Robucks and many of their fellow parishioners previously worshipped.
Asked what Holy Apostles has to offer St. Joseph, Father Kiesel mentioned numerous outreaches.
“We help the poor in Baltimore City, at the Franciscan Center, Beans and Bread, Chrysalis House, Archbishop Borders School,” he said. “We don’t look inward, we look outward, not just at Christmas, but 12 months a year.”
Plans for the merger were to be shared with the larger Holy Apostles community Nov. 5, and then the St. Joseph community Nov. 6. Little said that the staffs of both parishes will remain “if they choose to, until June 2015,” and that the merged parishes will take a new name.
A closing liturgy for Holy Apostles at School of the Incarnation is tentatively scheduled for June 8, Pentecost Sunday.
“Both Holy Apostles and St. Joseph have people with a strong social conscience,” Bishop Rozanski said. “Both help the poor, the marginalized, and I think that will certainly be strengthened as they come together.”
Also see:
Archdiocese of Baltimore releases official statement on Conventual Franciscan Father Michael Kolodziej
Mom’s group nourishes women’s spiritual life
PrevNext